This piece originally appeared in the Philadelphia Inquirer on Tuesday, January 30, 2018 and is on philly.com.

Professors Robert George of forum, sponsored by the Matthew Ryan Center at Villanova University, on the value, virtues and challenges of a liberal arts education.

Princeton and Cornel West of Harvard are about as opposite as opposite can be when it comes to their views on the world. That was clearly on display at a recent 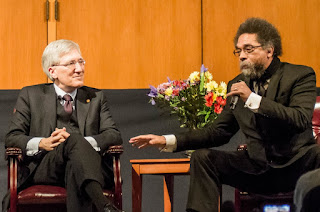 West is one of the nation’s premier African American scholars, whose real calling is as a philosopher and political activist; he sits to the left of the left wing of the Democratic Party. George is a constitutional scholar, with a particular focus on religion and morality, who fits nicely into the anti-abortion, conservative heart of the Republican Party.

Amazingly, these two eminent scholars, who see the political world very differently, whose policy prescriptions to solve the nation’s (and the world’s) problems are diametrically opposed, are genuine friends and have been for years. This led to a discussion of civic friendship, the idea that people who disagree politically can still find common ground to at least listen to one another with openness and respect.

As George stated: “Civic friendship is an absolutely indispensable condition of self-government. … If you don’t have civic friendship, disagreements turn us into enemies, and you cannot sustain a republic among people who regard themselves as each other’s enemies.”

Polarization is the byword of American politics today, which I would argue is due in part to a lack of civic friendship. When I see the person who disagrees with me on the recent tax cuts, for instance, as my enemy, someone to be ignored or, worse, condemned as evil, the bonds of democracy have already begun to dissolve. If your assumption about me, based solely on my taking a different position than you on the Affordable Care Act, is that I wish you ill personally and have your worst interests in mind, how can we ever find common ground?

Civic friendship takes the very opposite point of view. The assumption is we are friends with shared interests and shared values. Friends talk to one another. Friends listen to one another. When engaged in an exchange of ideas, friends are open to learning from one another, and possibly changing a position they have taken. I can only learn and grow when challenged by new ideas or opinions different from my own. Maybe that leads to a modification of my own ideas; maybe my position becomes more nuanced and sound. Either way, I am better off for engaging with others from a position of openness and civic friendship.

In our representative democracy – our republic – established by the founders and enshrined in the U.S. Constitution, disagreement was at the heart of the Philadelphia convention, but so was civic friendship. That is not to say all the founders gathered in Philadelphia in the summer of 1787 were friends. Though Lin-Manuel Miranda has demonstrated pretty well in the musical Hamilton the enmity that often animated the founders, there was enough trust in one another as fellow citizens of a new nation to “form a more perfect Union, establish Justice, insure domestic Tranquility, provide for the common defence, promote the general Welfare, and secure the Blessings of Liberty.”

Ultimately, the breakdown in civic friendship is the dissolution of trust of our fellow citizens, which can ultimately lead to the complete collapse of our American experiment in self-government. In introduction to her book Talking to Strangers, MacArthur Fellow Danielle Allen writes: “As for distrust of one’s fellow citizens, however, when this pervades democratic relations, it paralyzes democracy; it means that citizens no longer think it sensible, or feel secure enough, to place their fates in the hands of democratic strangers. Citizens’ distrust not of government but of each other leads the way to democratic disintegration.”

Every one of us who holds the idea of self-government dear must choose to trust our fellow citizens again. We need to reframe how we see our society based on the virtue of civic friendship, where our first instinct is trust and not suspicion. We have to be open and willing to listen to others’ differing points of view without anger or malice. To do this is an act of will, a choice we make. It is also an act of survival as a democratic people.