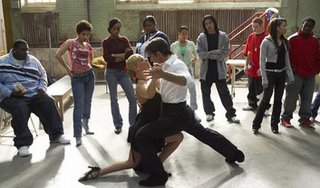 One could say that Take the Lead is formulaic, predictable, and unoriginal. All of this is true, but it is entertaining. As with all classic teen movies (yes, even though this is about ballroom dancing, this is a teen movie), the viewer is invited into the angst ridden world of adolescence only to witness the protagonists overcome all that stands in their way, if only for a moment.

After witness an angry student assaulting a Cadilac with a nine iron, Pierre Dulaine (Antonio Banderas) offers to teach ballroom dance to a group of students who have been consigned to perpetual detention. Each of the students has their own sad story (only two of which are explored), and ballroom dancing is the last thing they want. Dulaine captures their attention, teaching them life lessons such as respect, hope, and hardwork. The movie reaches its climax with a city-wide competition where these unlikely competitors impress everyone, including themselves.

Take the Lead is filled with pithy sagacity which at best is trite. Luckily, the film is not entirely mired in such banality; writer Dianne Houston fulfills her quota for chessiness, but never really goews overboard. There are some funny lines which buoy the plot between some touching moments of adolescent wonder.

What really makes this movie interesting is the fact that it is loosely based in reality. Pierre Dulaine really did teach ballroom dancing in the New York public schools (though not to high school students). More than 12,000 students have learned to wlatz, tango, rumba, foxtrot, and merengue do to the efforts of Mssr. Dulaine.

So, who should see this movie? Fans of Antonio Banderas (there is a tango sequence that can only be described as steaming), the Verve Remix collection, and teen movies will certainly get their money's worth. Those who really love ballroom (and want to laugh) will be better served by Baz Lurman's 1992 sleeper hit Strictly Ballroom.
Movies