The Revival of Sweeney Todd 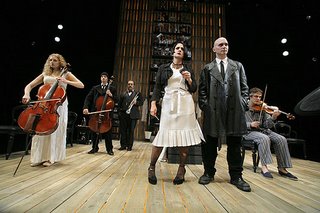 The blackest of black comedy, Stephen Soundheim's Sweeney Todd: The Demon Barber of Fleet Street is back on Broadway poised to win multiple Tonys. This exciting new production from John Doyle originated in London and features a single, sparse set sans barber chair. The audience is thrilled from beginning to end by this macbre story of Victorian murder and canabalism, laughing all the time.

The orchestra is also the cast, led by veteran Tony award winners Patti LuPone (who plays tuba) and Michael Cerveris (on guitar). Choosing accomplished musicians who are forced to play the entire complicated score from memory raises the level of musicality, keeping everyone focused from the opening bars to the final reprise. Lupone and Cerveris are joined by an incredibly talented cast, including Lauren Molina as Johanna and Benjamin Magnuson as Anthony, both in their Broadway debuts. Manoel Felciano as Tobias, the young narrator of the story, is poignantly innocent.

Patti LuPone perfects the guttersnipe Mrs. Lovett, selling the worst pies in London, while the vengeful Sweeney Todd is brought to life by Michael Cerveris who is truly terrifying. When they close the first act singing "A Little Priest" together, they are in perfect manic harmony. As the story continues in the second act, Sweeney Todd is more consumed with revenge against the judge who ruined his life and stole his daughter while Mrs. Lovett falls deeper in love with the demon barber, wanting only to retire to the country. As the body count increases, circumstances spin wildly out of control (as if they were ever under control).

Sweeney Todd is a ghastly delight that no Broadway fan should miss.
Performance