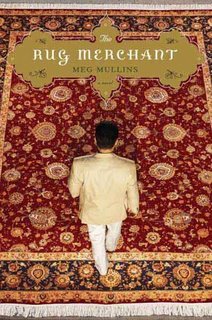 Meg Mullins' debut novel, The Rug Merchant, tells the story of an Iranian, Ushman Khan, living in New York City, selling the magnificent Persian rugs that his family have created for generations. Though his business is successful, Ushman is not. His wife, who remained in Iran to care for his mother, divorces him, claiming abandonment. " He tells his own story, succinctly and with an underlying emotion that draws the reader into the Ushman's own life:

"And she sent me here, to America, three years ago, after a terrible earthquake, when we lost many precious things[...]I havent seen her since, but will receive word, someday soon, that she has had a baby[...]And, because I often don't know what else todo with myself, I come here and wait, like I have tonight. I stand right where I have imagined so many times to have stood so that my wife would come to me. Would walk off the plane and find her place by my side. But she never did. And she never will. And though I miss many things about my country, I will not go back beause to do so would only leave the most important thing still missing. To go home only to have that one thing gone....I don't think I could."

While telling his story, Ushman is at JFK airport in queens, where he meets Stella, a Barnard student, a fellow immigrant to NYC, one from the South. Though separated by many years and insurmountable cultural barriers, they begin an unlikely affair that last through the fall semester. In it, Ushman learns about himself, Stella, America, and ultimately life itself. The liaison is complicated by Ushman's best client, Mrs. Roberts, whose own muddled interactions with Ushman Stella sees as an impediment to her loving Ushman.

Mullins description of the affair captures the poignancy of love in all its heartbreaking beauty. Her observations of the Ushman's double life is the tale of every American immigrant, trying to hold onto the past while embracing the future. Is it possible? Only with tears and a little bit of sorrow that might just be transformed into happiness.
Books