Another teen movie: "Stick It" 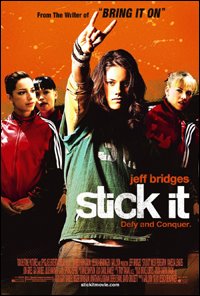 For those like me who grew up not with the Rat Pack but the Brat Pack (think Molly Ringwald and Pretty in Pink), teen movies hold a special place in our hearts. Adolescent angst is a gold mine to which Hollywood returns again and again, and from the obscene Not Another Teen Movie to the oversexed American Pie, we love them all. Bring It On writer Jessica Bendinger's newest offering , Stick It, plumbs the depths of teen tragedy through the lense of gymnastics.

Haley Graham (Missy Peregrym) is a former gymnastics all-star who walked away from Team USA at the World Championships for reasons unknown. Since then, she has become a regular juvenile delinquent who uses her skills on a BMX bike wreaking havoc wherever she goes. When she causes thousands of dollars damage on a construction site, the judge mandates that she return to gymnastics as a place to channel her youthful energy.

Jeff Bridges plays Burt Vickerman, the sleazy has-been gymnastics coach who promises parents that their daughters will make it to the Olympics if they train with him, at an exorbitant fee. Eventually, Haley finds a way to balance her desire to be an individual with the highly structured world of competitive gymnastics. In the process, she teaches her teammates that life is about more than just competing for the gold.

Stick It lacks the star power of its older sister Bring It On, where Kirsten Dunst, Elisha Dushku, and Gabrielle Union commanded attention. Though Missy Peregrym makes the transition from the small screen (Smallville) to the silver screen, the supporting cast is just mediocre. This is less an issue of talent than writing, because the supporting characters are never fully developed. They are just caracitures of teens. The film also lacks a formidable antagonist, which in a movie about competition, leaves the viewer yearning for something more. When Haley's archnemesis shows up at the final competition, there is no real spark between them.

Be that as it may, there is enough here for those who love the teen movie genre. Have fun, summer's almost here.
Movies