The DaVinci Code: The Movie 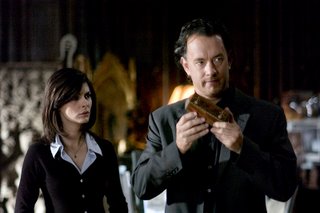 Ron Howard presents a faithful adaptation of the international bestseller, The DaVinci Code, which holds true not just to the structure of the novel but the very details too. With more than sixty million copies in print in more than 44 languages, adapting Dan Brown's novel has potentially created a critic-proof film. Millions of dollars in box office receipts does not a great movie make. Unfortunately, in the case of The DaVinci Code, it doesn't even make a good movie.

The worst offense of this movie is that it is boring. Considering the source material, this should not be very surprising. This is a book about talking, interspersed with flashbacks and the occasional change of location. Gorgeous locations, grainy flashbacks, and the occasional thirty second chase that always ends in the heroes escaping, cannot save this soporific tale. There is no excitement, nothing to get the adrenaline pumping, and no body to really care about.

Starring Tom Hanks in the leading role as Robert Langdon, the Harvard symbologist (whatever that is) who is dragged into the investigation of the murder of a Louvre Musuem curator. French actress Audrey Tautou, star of Amelie, portrays Sopie Neveu, granddaughter of the murder victim and Langdon's partner in solving DaVinci's code. Unfortunately, there is not enough chemistry between these two to create smoke much less fire. The dialogue is strained, and neither Hanks nor Tautou are able to doing anything with it.

Slightly better are Jean Reno as Captain Fache, the investigating officer who suspects Langdon of the crime. His mastery of the gruff exterior makes him the perfect foil. Sir Ian McKellan who plays the crippled Sir Leigh Teabing is maniacal in his portrayal of the mastermind behind the events of the story. Sadly, neither performance by these secondary characters can buoy this film. When the most exciting scene in the movie is Langdon and Neveu's narrow escape from Fache in the back of an armored truck (thanks to, you guessed it, more talking), no amount of acting can save it.

As to the substance of The DaVinci Code, Ron Howard tries to clean up Brown's rantings by making Langdon and Neveu more sceptical of Teabing's conspiracy theory. Ultimately, they come to believe the story of "royal blood," and therefore the audience is expected to believe it as well.

There are, in fact, two major questions at stake in The DaVinci Code, book and movie. First, was Jesus human or divine; this is the Arian Controversy, named after the priest Arius who preached that Jesus was human but not divine. The Council of Nicea, which is mentioned wrongly, was convoked to deal with this controversy, not to determine the books of the Bible. It was determined at the Council that Jesus was both human and divine. A position that was the majority poisition of the Church. (There would also be those who thought Jesus only divine and not human at all.) As evidence, Brown offers scant evidence, just an ancient story that Jesus fathered a child.

This, then, is the second question: Did Jesus father a child with Mary Magdalene and begin a royal bloodline? For evidence, Brown offers two scant verses of Gnostic gospels, one from Philip and the other from Mary Magdalene, that claim Mary was closer to Jesus than any of the other disciples. Intrpreting these references as a Modern, Brown misses the point. It is not to physical or sexual closeness that the two gospels refer, but understanding. The Gnostics eschewed sexuality for knowledge; to say Mary was closer to Jesus is to say she better understood His teaching. Brown claims that the Gnostic gospels were rejected by Constantine. This is preposterous. They were rejected by the Church for a host of reasons, not least of which is that there could not have been written before the second century AD and possibly the third. The New Testament canon was confined to the first century. This is the same reason the newly translated Gospel of Judas was rejected as well.

In addition to Brown's biblical evidence, he offers DaVinci's paintings, particularly his Last Supper. He claims that the Apostle on Jesus right, beardless with flowing red hair, is not John as is traditional, but Mary Magdalene. He also claims that the presence of more than one cup on the table and the V created in the negative space between Jesus and the beardless Apostle is proof positive that Mary is the Holy Grail, not the cup that holds the wine of Eucharist, but the body that holds Jesus' child. Besides the fact that this is an interpretation of the Last Supper that no one in the art world find valid, it tells us nothing about Jesus. It is only proof of what DaVinci might have believed, 1500 years after Jesus died. That is proof of nothing.

Ultimately, The DaVinci Code was a better book than it was a movie, and it wasn't a very good book! The question is, why are people such intellectual lemmings that they buy into this?
Movies