An Impossible Mission: Recreating the Original 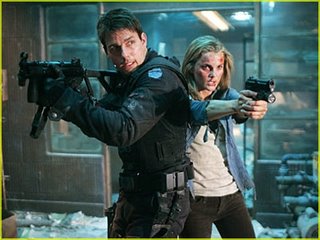 Summer has officially begun, at least for Hollywood. The first major blockbuster of the season, Mission: Impossible III, completed its mission, securing the top spot in box office receipts with $48 million domestically and $118 milliion worldwide. Unfortunately for Paramount, M:I III is unlikeliy to hold the top spot for long with The DaVinci Code and Over the Hedge both opening later this month.

Tom Cruise is once again Ethan Hunt, the IDF agent who accepts only the most difficult missions. In this third installment, Hunt has left the field and works training new agents. Hunt is now called upon to head a rescue mission to extract an agent he trained. The agent, Linsey Ferris (Keri Russel), was taken hostage by the world's most elusive arms dealer played by Philip Seymour Hoffman in a serious departure from his award winning portrayal of Tuman Capote.

Mission: Impossible III is better than M:I II, but like all sequels, it lacks originality. The latex masks that were such a thrill in the original film are just tired now. Oh, and guess what, there's a mole at IDF, again! JJ Abrams, who directs M:I III, approaches the movie much the way he does Alias, the television show he created, with lots of explosions and enough firepower for a major coup in a first world country. There is no subtlety, little spycraft, and it lacks the sexiness of even the television show.

Few will anything worth raving about, but on a hot day, an air conditioned theatre is not a bad place to hang out.
Movies