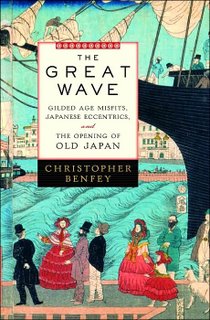 In 1854, Commodore Perry and his Black Ships sailed into Edo Harbor, demanding that the Japanese sign a commerce treaty acknowledging a new friendship with the United States. Over the next half century, a multitude of Americans would make the long voyage to Japan, hoping to discover that ancient and alien world known as Old Japan. In his book, The Great Wave: Gilded Age Misfits, Japanese Eccentrics, and the Opening of Old Japan, Christopher Benfey recounts the misadventures of characters like Henry Adams, John LaFarge, Herman Melville, Okakura Kakuzo, Isabella Stewart Gardner, Frank Lloyd Wright, and many others.

Japan, for a short time, was an unexplored frontier for Gilded Age Americans. Some searched for spiritual fulfillment in Buddhism, like Henry Adams who traveled there after the death of his wife clover. He was overwhelmed by the funerary shrine at Nikko, but with other Americans in Japan, he was less impressed. Of Ernest Fenollosa, Adams wrote: "He has joined a Buddhist sect: I was myself a Buddhist when I left America, but he has converted me to Calvinism with leanings toward the Methodists."

Adams' traveling companion, the artist John LaFarge, went to Japan for artistic inspiration, which he found in spades. Like Frank Lloyd Wright, whose own architecture would be greatly influenced by Japanese conceptions of negative space, LaFarge found inspiration in everything from tea utensils and the kimono to Buddhist statuary and woodblock prints. Japanese art intrigued not only the artists, but the great collectors of art as well. Mrs. Jack Garner even created a Buddhist meditation room in her Fenway Court museum where she also displayed Japanese art collected by her good friend Okakura. Both the Peabody Essex Museum and the Museum of Fine Arts Boston became the primary beneficiaries of this new interest in Old Japan.

Christopher Benfey has contributed greatly to an unexamined period in American history, which deserves greater attention. The Gilded Age is remembered almost exclusively as the domain of the Robber Barons, but The Great Wave reminds us that Japan was equally important (in fact setting the stage for 20th century events), warranting a trip from the great American mikado, President Ulysses S. Grant.
Books