Thank You for Smoking 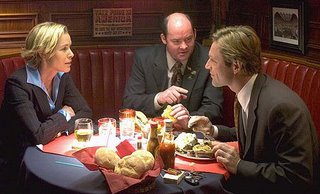 If you are a furious former smoker in search of a rabid anti-smoking polemic, Thank You for Smoking will leave you unsatisfied. If, on the other hand, you are looking for a witty film that lampoons tabacco executives, Washington lobbyists, investigative journalists, Hollywood agents, and political correctness with equal aplomb, than this is for you.

Nick Naylor (Aaron Eckhart) is the chief spokesman for the Academy of Tobacco Studies, possibly the most repugnant man in the country. His task is to defend his industry against the attacks of the media and to find a way to make cigarettes cool again. When Heather Holloway (Katie Holmes) asks to interview Naylor, they move from the restaraunt to the bedroom, where he gives up all his secrets. After being kidnapped and almost killed by the nicotine patch, Holloway's story breaks, and Naylor loses his job.

The strength of this movie is two-fold: the writing and the cast. Based on the novel of the same name by Christopher Buckley, the dialogue is quick and funny, but more importantly its constantly on attack; no one is spared. The great lines are delivered by a star studded cast including: Sam Eliot, Rob Lowe, William H. Macy, Robert Duvall, and JK Simmons in a reprise of his J. Jonah Jameson roles from Spiderman.

The touching subplot of Thank You for Smoking, involves Naylor's twelve year old son, Joey (played by young veteran Cameron Bright) who adores his father but simultaneously fears the embarrassment suffered by all pre-adolescents. Joey becomes his father's savior when, at a Senate hearing Naylor admits that when his turns eighteen, he will buy his son's first pack of cigarettes, even though he would rather that his son not smoke because of te health dangers.

This, ultimately, is the point: personal freedom trumps all. And this is what many proponents of the nanny state will find so offensive about Thank You for Smoking.
Movies