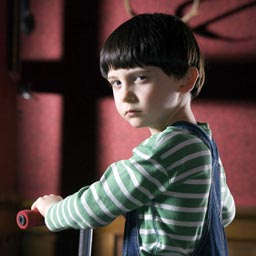 The sixth day of the sixth month of the six year, and the world has not yet been plunged into chaos, which is most auspicious for 20th Century Fox Pictures. On a special Tuesday release, The Omen opened across the country today, thrilling audiences in this remake of the 1976 classic.

Part of the satanic trilogy which included Rosemary's Baby and The Exorcist, The Omen weaves together prophesies from the Biblical books of Daniel and Revelation. The signs of the impending apocalypse culminate in the birth of the beast, the son of Satan who is marked with the number 666. Damien, the son of an important American diplomat, whose queer behavior and bizarre influence lead to deaths one after another, is the beast.

Any remake leaves one yearning for the original, and The Omen is no different. The 1976 version starred Gregory Peck and Lee Rimick, roles which are handled with aplomb by Liev Schreiber and Julia Stiles. The real stars of this movie, though, are Mia Farrow and Seamus Davey-Fitzpatrick. Farrow portrays Mrs. Baylock, the new nanny, a nefarious Mary Poppins sent to protect the son of Satan. , and her climactic scene had everyone one the edge of their seats. Davey-Fitzpatrick plays Damien himself, his eerie presence is creepiness itself.

Director John Moore approaches The Omen like an artsy believer, allowing light and darkness to battle in every scene, every shot. He is overly addicted to using the thundering sound track to scare his audience even more than the visuals. What Moore does brilliantly is pace. The film builds incrementally, mired in the unbelief of Damien's father Robert Thorn. Once Thorn becomes a believer, the film moves at the speed of a runaway train.

Anonymous said…
My inaugural address at the Great White Throne Judgment of the Dead, after I have raptured out billions!
Read My Inaugural Address
My Site=http://www.angelfire.com/crazy/spaceman
Your jaw will drop!
11:18 AM