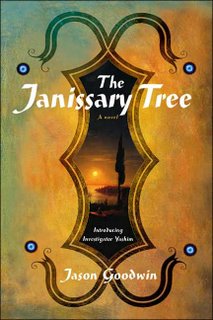 Summer reading should be fun and relaxing, and if possible adventurous. Add in a little history and an exotic local, and voila, a great summer read. The Janissary Tree by Jason Goodwin fits the bill perfectly. Set in the fascinating world of early nineteenth century Istanbul, home of the sultan and capital of the Ottoman Empire, The Janissary Tree is classic detective story at heart.

Yashim Togalu is a eunuch in the service of the sultan, yet you will not find him fanning the sultan or guarding his harem. Instead, Yashim is an investigator whose talent for finding the truth is used in the service of the empire. When four cadets from the New Guard go missing, and one turns up dead, Yashim has ten days to uncover the plot that involves the once great and recently destroyed Janissaries Corps. A parallel investigation of a harem death and the theft of the sultan's mother's jewels keeps Yashim busy.

The Janissary Tree makes for a good read because it is populated by colorful characters you want to get to know. Whether it is the Ambassador of Poland, whose country no longer exists, the transvestite dancer, whose queenly proclivities go almost unnoticed, the sultan's mother, whose Haitian background and strength of character make her a match for her own son, or the green grocer who orders his customers about while providing them with exactly what they didn't know they wanted, Goodwin's characters are real and alive. Even in the dialogue of the characters, Goodwin draws a distinction of class that would have existed in such an ancient and venerable city. His use of cockney English for the lowest classes, to the American ear sounds odd, but his point it well taken.

Not only does Goodwin tell a great story filled with quirky characters, he places it all in such an unfamiliar locale granting him the ability to open up a whole new world to his readers. His familiarity with Constantinople (which he tells us is still its proper name) and its history make for a delightful entertainment. You can smell the spices, see the colors, and hear the cacophony that is Istanbul.

Anonymous said…
This is the best site. I'm reading The Janissary Tree now and it is a terrific read. It's great to find a site with a reading list that can be believed in. I apologize if this message appears more than once, it is my ineptitude. Thanks, Miki
2:22 PM

Nicole said…
See, I'm so glad I checked your blog. I was going to buy this for you as a belated Christmas gift!!
3:36 PM

Anonymous said…
You can find out more about the award winning Yashim the Eunuch series at www.jasongoodwin.net.
The third book, The Bellini Card, will be out this summer, you can visit its blog HERE.
2:22 PM