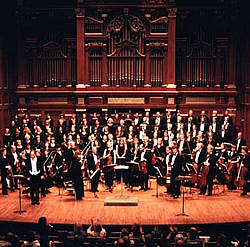 Chorus por Musica, Boston's foremost amateur choral society now in its fifty-seventh season, performed Giuseppe Verdi's Attila for its annual spring concert opera on June 4, 2006. Under the baton of maestro Jeffrey Rink, now in his sixteenth season, this was the New England premier of the opera.

First mounted at La Fenice in Venice in March 1846, Attila is set in 453 AD just outside of Rome. Attila and his Huns are preparing to sack Rome, having wreaked havoc across Italy. Uldino , Attila's slave, presents to his master, Odabella, one of the female warriors who mounted fierce resistance to the Huns. Attila immediately falls in love, but Odabella only recently witnessed the death ofher father and swears vengeance. Defending Rome is General Ezio who offers Attila all of Italy if he but leave Rome to Ezio. Attila rejects the offer because it would require that Ezio turn traitor. Attila is plagued both by dreams of doom. He avoids one attempt on his life with the help of Odabella, and announces that she will become his queen the next day. Odabella escapes from Attila's camp, singing that she will be avenged and explaining to Foresto, that she must kill Attila with the sword he presented to her. When Attila discovers Odabella, Ezio, and Foresto together, he accuses them each of betrayal. As Ezio's men egage the Huns in battle, Odabella ends Attila's life and the threat to Rome.

Verdi's score, divided into three acts with a prelude to set the scene, is beautiful. In the second act, Verdi gives a virtuoso performance of orchestral color when a storm blows into Attila's banquet. The finales that close each act are brilliant, with the quartet finale that includes Attila's death offering unbridled power and emotion. Maestro Rink elicited the very best sound from his soloists, chorus, and orchestra, offering what might have been the best opera experience in Boston this season.

Bass Stephen West, who has sung with the Metropolitan Opera, sang the lead, using his vocal strength and acting ability to capture Attila's royal bearing, generous nature, and vigorous potency. Robert Honeysucker, the Boston barritone favored by audiences the world over, played the Roman general Ezio. Honeysucker's power and lyricism were the necessary counterpoint to West's commanding Attila.

The star of the performance, though, was soprano Paula Delligatti who was the embodiment of Odabella. A native of Pennsylvania, Delligatti sings regularly in Europe, but is not seen nearly enough in this country. A true actor, even without costumes or scenery, Delligatti was Odabella. Her every gesture and every note is filled with emotion. When she stabbed Attila in the final scene, the audience literally gasped.

Season after season, Chrous pro Musica offers some of the best music in Boston. In 2006 - 2007, they will mount Cavalleria Rusticana and Pagliacci for their concert opera Sunday, June 2. Get your tickets now!
Performance