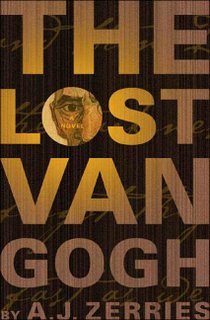 During World War II, in addition to the human carnage of the Holocaust, many great works of art owned by Jewish people was stolen by the Nazis, depriving the victims of the Holocaust and their heirs of not just wealth, but family heritage and history as well. Nazi plundered art has wreaked havoc in the art world in recent years, leading museums and galleries and innocent buyers to return work they never knew was stolen.

Many Nazi escaped from Germany before the Allies secured the war torn country, and Argentina was the destination of many. In The Lost Van Gogh, a recently published detective novel by AJ Zerries, the husband and wife writing team Al and Jean Zerries, looted art finances the escape and post war life of Udo Luscher, a sadistic Gestapo chief whose cruel torture of Jews made Himmler’s boy.

When a lost Van Gogh painting is delivered to the Metropolitan Museum in Manhattan by UPS, the case is handed to Clay Ryder, the former Navy SEAL turned cop known as the Art Guy. His special domain is stolen art, and it is his job to track down the rightful owner of the plundered painting. The appearance of the Van Gogh leads to a scramble within the world’s art and organized crime. When the Mossad, Israel’s infamous intelligence service, arrives on the scene, the stage is set for an intense roller coaster ride of mayhem.

In Detective Clay Rider, the Zerries’ have created a worthy character endowed with both the physical and intellectual qualities to join Laura Joh Roland’s Sano Ichiro and Sharon Kay Penman’s Justin de Quincy, investigators and heroes both. Emotionally, Ryder is a mess, another important attribute of the successful modern hero. Plagued by the ghost of his wife, Ryder knows no camaraderie with his fellow detectives in the Major Case Squad, who see him as distracted and defective, in other words dangerous.

The Lost Van Gogh combines good story telling with endearing characters, frightening villains, gunfire and explosions, and a kidnapping and wicked chase. In other words, it has everything you need for a few hours of summer entertainment. Don’t be surprised to see The Lost Van Gogh on the big screen, and certainly it would be much better product than the much ballyhooed and more boring Da Vinci Code.
Books