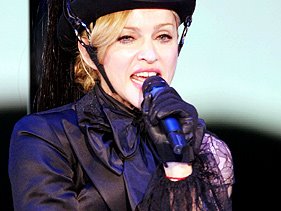 Madonna brought her Confessions tour to Boston's TD Bank North Garden this weekend, her signature creativity and energy entertaining fans for more than two hours straight. Staging a massive exhibition reminiscent of the very best of performance art, Madonna's ever changing wardrobe and sets offered concert goers a spectacle matched by few in the entertainment world, bar none.

In addition to the throbbing bass lines and mirrored props (including a mirror ball for the opening number and a mirrored cross later in the show), four video screens dominated the stage throughout with images and colors. In the opening two number, images of horses and x-rays of Madonna's own broken clavical (th result of being thrown from a horse), adding a very personal dimension to the show.

Musically, Madonna worked in some classics "Like a Virgin" and "Lucky Star" with almost every number from the new Confessions cd. In only one song, "Sorry" did she become overtly political, with images of the current Bush administration juxtaposed with images of the like of Osama Ben Laden, Kim Jong Il, Adolph Hitler, Sadam Hussein, and other killers and hate mongers as well as various religious leaders. It was crass and crude, vitriolic from beginning to end, but it was only one song thankfully. 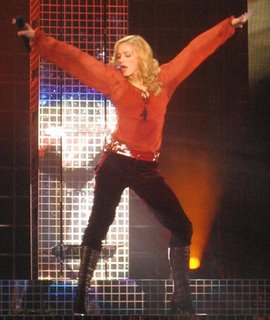 The finale "Hung Up" had the crowd dancing and singing along, while gold mylar baloons fell from the ceiling. The only real disappointment was Masonna's refusal to do an encore. Like most fans who have followed her career from the beginning, I and encore of previous hits like "Vogue," "Material Girl," or "Love Profusion" would have made the $180 ticket price a little more palatable.

That said, there was little to complain about and much to celebrate. Though she doesn't dance like she used to, who can at almost forty eight, but she makes up for it with tremendous vim and verve, and a creativity that borders of genius.
Music Performance

Anonymous said…
Hi there, came across your blog quite by accident but glad I did.

First let me say, my girlfriends and I drove from Halifax to catch Miss Madge in Boston and despite the expense of the trip and the cost of tickets (not to mention driving in Boston~yikes!), it was worth every penny. She is probably the hardest working performer I've seen and she certainly did not disappoint.

I, did not find the video montage accompanying 'Sorry' offensive. It was certainly more obvious than subliminal but not quite crossing the line into bad taste (It is Madonna after all). I have some pics of her Boston concert on my blog if you're interested.

Also, read you two movie reviews of Devil and Pirates. I think you nailed it spot on with Devil. My fav scene was Meryl's diatribe about the blue sweater and the pervasive influence of the fashion industry in even the most seemingly fashion-less choices consumers make.

As for Pirates, I agree that it's an entertaining summer blockbuster and as such we can't expect Oscar material but I still left the theatre with a nagging feeling that Part 2 was missing that je ne sais quoi that made the first one so charming. Perhaps this one relied a little too heavily on action and special effects and the clever character interaction and witty dialogue suffered. But that's just my opinion. I still enjoyed the film.