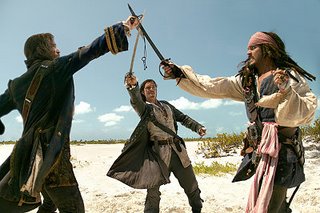 Johnny Depp has created an endearing and enduring character in Captain Jack Sparrow, allowing Disney to offer movie goers a delightful break from Holloywood mediocrity this summer. The second installment of Pirates of the Caribbean: Dead Man's Chest is just as funny and advenurous as the original, quite an achievement in an atmosphere of ever more insipid sequels being churned out by the film industry.

Depp, Orlando Bloom, and Keira Knightley once again form the prettiest trio in movies, swashingbuckling their way across the high seas, this time in search of Davey Jones' chest. Sparrow's quest is driven by deal he made with Davey Jones to become Captain of the Black Pearl, while Will Turner and Elizabeth Swan hope to save their own lives, which are under the threat of hanging for their role in helping Captain Jack escape British authorities. The once Commodore Norrington also wants the dead man's chest to barter for his own life, which was forfeit during his fruitless search for Sparrow. Finally, the Dutch East India Company is the corporate evil that hunts for the chest in order to rule the oceans in its quest for filthy lucre.

Like any good middle story in a trilogy, Dead Man's Chest is darker than the first with Miss Swan proving herself an able pirate and Davey Jones' habit of unleashing a mythical cephalopod to destroy ships and enslaving the survivors. It offers a mix of new characters to join the old, like Bootstrap Bill Turner, Will's father, and a voodoo priestess who could convince the most committed Puritan to embrace the dark arts. The island of cannibals and a return to the pirate port of Tortuga make for riotous fun as well.

To all of those critics who complain about about the continuous references to the first film as well as the addition of so many subplots, get over it. Dead Man's Chest is a summer blockbuster, not a graduate course in Shakespeare. Get over yourselves.

Any movie that ends in a cliffhanger, with Captain Jack's last words being "Hello beasty" deserves a big box office.
Movies