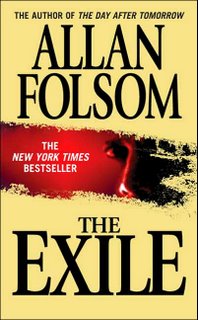 Alan Folsom’s The Exile is perfect summertime beach reading. Written like a movie script, The Exile is fast-paced, moving from Los Angeles to England to Paris to Switzerland to Russia. Flashy explosions and citywide chases are balanced by intimate moments of intense emotion. Folsom does worldwide conspiracy better than most, as evidenced by previous best sellers Day After Tomorrow and Day of Confession.

Folsom has a knack for including little details about his characters that makes them come alive. They are real people, and like people you meet in real life, you learn about these characters over time, not in a single descriptive paragraph like so many hacks. Each of the characters is a complicated individual, with a mixed bag of good and bad impulses, acting on all of them.

John Barron is the youngest and newest member of the elite 5-2 Squad, LA’s best investigative team that for a century has brought down some of the worst criminals in the city’s history. On Barron’s first day, he witnesses how the squad really works, and is appalled by the assassination of a prisoner in custody. In the midst of that investigation, another more deadly murderer, Raymond Thorne, comes into the custody of the 5-2 Squad. The trail of bodies he leaves behind after he escapes leads to another attempted assassination. At the end of the day, the 5-2 Squad is no more, and John Barron is a hunted man.

With his sister Rebecca in tow, Barron changes their names and moves to England to escape LAPD reprisals. Just as a new life is beginning for John and Rebecca, as the nightmares dissipate and the fear subsides, the once dead Raymond Thorne enters their lives again and the body count resumes. By virtue of his tenacity and intuitive detective skills, Barron is the only person who can stop Thorne, if he can keep from being killed himself.