Christina's Homage: Back to Basics 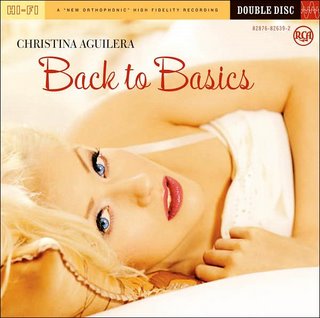 Four years since the release of her last album, Stripped, and eighteen months after entering the studio, Christina Aguilera’s album Back to Basics dropped on Tuesday. Much anticipated, the two-disc cd is bound to satisfy old fans and even garner new ones. An homage to the music that influenced the has influences the pop diva, Back to Basics nicely blends jazz, funk, R & B, and big band rhythm and instrumentation with Aguilera’s typical sex-infused pop sound.

The first disc is the more modern sounding, with a liberal dose of sampling and electronic sounds. It reminds me of the recent Verve Remixed project where classic jazz recording were remixed by some of today’s star DJs. The second disc includes no sampling and nothing electronic, only live instruments with lots of horns and plenty of strings.

The first single released, “Ain’t No Other Man,” proves beyond a doubt that Aguilera has the most powerful pipes on any singer of her generation. She is able to reach deep down, finding a resonance touched with emotion that is a throw back to the music that influenced her. Tracks like the gospel influenced “Makes Me Want to Pray” and orchestral “Welcome” showcase Agulera’s vocal prowess. “Candyman,” which is bound to be released as a single, has the big band, bubble gum sound of “Boogie Woogie Bugle Boy,” the World War II standard. “Nasty Naughty Boy” is a sultry sounding tribute to the bygone days of smoky jazz clubs and live performance.

Aguilera makes only one real misstep on Back to Basics, and that is “Thank You” the last track on the first cd which is intended to be a tribute to her fans. With the inclusion of fans saying how much they love their idol, how her singing has changed their lives, how she is the best singer ever, et cetera, et cetera, it comes off as pure ego maniacal schlock. Instead of celebrating her fans, Aguilera is celebrating herself.

All in all, this is a good cd, worth listening to from beginning to end, showcasing Aguilera’s greatest gift, her magnificent voice.

Anonymous said…
Xtina sucks!
the worst album of she ever~~That's so stupid of her did this rubbish thing out!
2:53 AM