Shakespeare on the Common 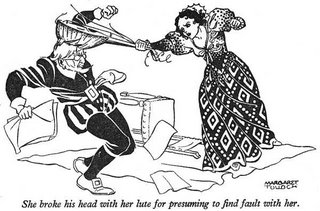 The schlock began even before Shakespeare's dialogue when a woman hangs out an upstairs window crying, "Anthony, Anthony" like the old Prince pasta commercials. Cute, but a harbinger of worse things to come. Originally set in Italy (before unification in the nineteenth century), director Steven Maler chooses a depression era Italian enclave of the North End in Boston as the setting. This leads the cast to change every mention of Padua to "Bostonia," a cheap joke that simply becomes more grating with each use. Shakespeare's characters are turned into boardwalk charicatures of Tony Danza-inspired Italian-Americans, slurring their words with the occasional "Eh oh, oh eh."

All of this is tolerable, until the worst begins at the end of the third act. According to Shakespeare, on Katarina's wedding day, Petruchio shows his true colors, arriving dressed as the aristocratic beggar he is. He is marrying Kate for her dowry, not for love. In Maler's version, Petruchio's costume is that of a Mardi Gras reveller, complete with stuffed cod piece. It was lewd and sophomoric, toliet humor at its very worst. Besides that, a Mardi gras jester is out of place in both Padua and Boston. It simply makes no sense.

At the opening of the fourth act, when Kate and Petruchio arrive in Verona (according to Shakespeare), Maler sets the scene on Revere Beach. At that point, I joined my friends who to leave. It was simply too much. Taming of the Shrew, like many of Shakespeare's masterpieces, is perfectly suited for a modern adaptation. Cole Porter's Broadway version, Kiss Me, Kate, is the best example, but there are others, including the teen movie 10 Things I Hate About You. All it takes is a cohesive vision. This production not only lacks such vision, it feels like direction by committee where everyone's cute or funny odea is incorporated into the final product.

Too bad. Maybe we will be luckier next summer.
Performance