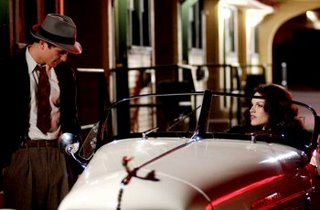 Let us be clear, The Black Dahlia is not about the famous Black Dahlia murder case. Like the James Ellroy novel on which it is based, it is a complete work of fiction. The murder of Beth Short in Los Angeles in 1947 is simply the jumping off point for a story of deceit, sexual depravity, police corruption, and, oh yeah, murder.

The gruesome story of Elizabeth Short is both simple and complex. Born in Boston in 1924, she grew up in Medford, Massachusetts, where she dreamed of one day making it in the movies. At nineteen, she moved to California, first living with her father and then on her own while she tried to break into the Hollywood scene. She was attracted to men in uniform, and dating several. January 15, 1947 Short's severed body was discovered in LA. She had been beaten, sodomized, and cut in two. Her face, once stunningly beautiful, was mutilated. 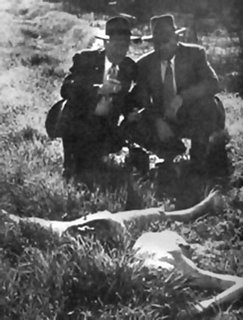 Though the press ran grisly photos of the mutilated corpse of Beth Short, using the macbre murder to bolster their circulation, the police were baffled. Close to fifty false tips were called into investigators, from false confessions to equally false accusations. The police have never solved the case. For more than half a century, the Black Dahlia case has been a source of intense curiosity, spawning books, websites, movies, and more theories than physicists have for the origin of the universe.

As for Brian De Palma's movie, that is another thing all together. Josh Hartnett and Aaron Eckhart play detectives Bleichert and Blanchard who through manipulation become the lead investigators of Short's murder. Much of the movie is about their personal lives, including a bizarre love triangle involving Scarlet Johansson. None of this ever really rises to the level of character development though. At the end of the movie we know little more about these characters than we did at the beginning.

Hilary Swank plays the beautiful heiress Madeleine Linscott who turns out to be the key to solving the case. (Yes, in the film the case is solved, with all those nasty lose ends neatly tied up at the end.) Of course, Hartnett beds her, adding a layer of complexity to his extremely unorthodox love life. The Linscott mansion does become the setting for the two best scenes in the movie, both involving Madeleine's mother Ramona, portrayed brilliantly by Fiona Shaw. As the perpetually drunk, loveless grand dame, Shaw is both hysterically funny and depressingly sad.

In what comes across as a ham-handed attempt at accuracy, the subplot of police corruption adds nothing but tedium and misdirection to the movie. Since the writers decided to remove all of the complexity from the actual case by ignoring the media and the false leads, the corruption and the love triangle serve to add forty-five pointless minutes to the movie while helping establish its film noir bona fides.

I just don't get why The Black Dahlia is a fictional account of the Beth Short murder when the actual story is so gripping. An opportunity was missed here and nothing can be done about it. Sadly, the fiction is so convoluted, it is difficult to enjoy (and I think that may have been the point). Wait for this one to come out on DVD.