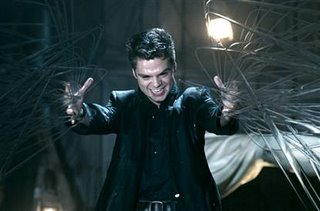 The Covenant is ninety-seven minutes of visual clichés—lingering fog, unlit hallways, full moons, and lightning storms—lacking all creativity and originality. Director Renny Harlin, whose Long Kiss Goodnight is one of my all time favorites, has committed the ultimate sin with The Covenant, he has created a boring movie. By the end, I couldn’t wait for it to be over so I could leave.

The Sons of Ipswich are introduced as four high school seniors attending an exclusive prep school in Massachusetts, old money with all its privileges and non of the responsibilities. Caleb, Pogue, Reid, and Tyler are scions of the four families who founded Ipswich colony whose family history includes the Salem Witchcraft Trials and a covenant binding them to one another for their protection. Each of the boys, at thirteen, received a modicum of magical power (sans spells or potions or source) and each waits to ascend to their full power on their eighteenth birthday.

There is one hitch, using magical power is addictive, and each use causes the user to age. A fifth boy with the same powers, born outside of the covenant, comes calling. Chase, already addicted to the power, wants Caleb to will him his power in an effort to resist the rapid aging magic causes.

This movie is crawling with undeveloped characters, all quickly sketched in two dimensions. I guess being pretty and rich is enough for some, but I find myself wanting something more. These are high school seniors, and yet there is but one fleeting reference to attending Harvard. It seems no one dreams about their future.

Producers decided to film this movie in Nova Scotia instead of Massachusetts. This makes for a film that looks unrealistic, at least to those who know what Ipswich looks like. There is also another minor gaff when on character mispronounces Gloucester. In the theatre in Boston where I saw the movie, the audience audibly growned. Just one more sign that this is a poorly made pciture.

There is little action in The Covenant, with the exception of a very cool car accident everyone saw in the previews. The special effects are well done, but they are not enough to save the film. The climactic fight scene even manages to make magic boring. The Covenant might have been number one in its opening weekend, but that was just the teenie boppers going to see the pretty boys. It will disappear after that faster than cake at a fat kid's birthday party.

Anonymous said…
I read your review with interest, but the thing that lit it up for me was the line "disappear faster than cake at a fat kid's birthday party".

That was both hilarious and so descriptive. I loved it.
8:15 PM