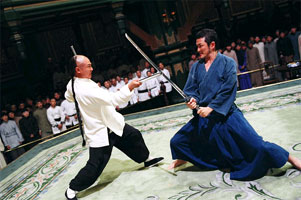 Finally, a fall movie worth seeing. Fearless, purported to be Jet Li's last martial arts movie, is the story of Huo Yuanjia, a national hero is China. Taking its place along side of such international hits as Hero, House of Flying Daggers, and Crouching Tiger, Hidden Dragon, Fearless shares the twin strengths of a compelling story and adenalin infused action sequences. It is that rare type of movie where fight scenes are interspersed with poignant moments. Choices have consequences in Fearless, and lives are changed as a result of the decisions made by individuals.

Fearless opens in Shanghai circa 1910. Huo Yuanjia has accepted the challenge to battle four champions representing the four major foreign powers in turn of the century China. Huo quickly dispatches the first three champions, a British Boxer, a Prussian soldier, and a Spanish swordsman, before the films cuts to tell the story of Huo's life. Finally, the film's climax comes when it returns the fight of the century where Huo faces his strongest challenger, Japanese fighter Anno Tanaka. It is here that Huo unites the people of China against the foreign imperialists who wish to humiliate them.

Huo Yuanjia did not begin life intent on uniting his people. Instead, he wanted nothing more than to be a fighting champion, especially after seeing his father hold back the killing blow from a challenger. Young Yuanjia, with the help of his best friend, steals the wushu manual to learn the martial arts his father refused to teach him. As he grew, he knew victory after victory but learned nothing of the self-control, the balance, that martial arts can bestow on a fighter. He wanted only to be known as the champion of Tianjin province. A proud, head-strong, brash young man, Yuanjia kills a man, and the fateful act costs him everything.

In the thousand mile journey into oblivion that follows, Huo Yuanjia cares not whether he lives or dies, but he is nursed back to life by an old woman and her blind granddaughter. Living in the idyllic village, he begins to understand that he has nothing to prove. It is not the approval of others that matters but self-knowledge. To know that you can defeat your opponent, that you are the stronger competitor, is enough. This was the reason Yuanjia's father had held back the final blow. Developing a refined fighting style known as the Missing Fist, Huo Yuanjia has nothing to prove and needs no one's approval. He sets about making amends for his previous life and uniting the Chinese people.

Juxtaposed against this story is Yuen Wo Ping's action sequences. With a resume that boasts Kill Bill, The Matrix Trilogy, and Crouching Tiger, Ping's martial arts choreography is much sought after. In Fearless the great choreographer meets the great artist, and the result is magical.
Movies