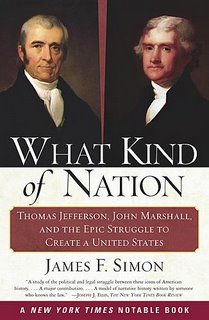 James Simon, Dean Emeritus of the New York Law School, has written a seminal work on the history of the early republic, comparing titans Thomas Jefferson and John Marshall—Virginians, cousins, lawyers, and political enemies. What Kind of Nation recounts the struggle between America's first political parties, Jefferson's Democratic-Republicans and Marshall's Federalists, over the future of the federal judiciary and the future of the democratic experiment called the Unitied States.

After losing the 1800 election to Jefferson, John Adams attempts curb Jefferson's Republican influence by filling the judiciary with faithful Federalists. His most influential and lasting appointment was John Marshall as Chief Justice of the Supreme Court. Over thirty four years leading the Court, Marshall secures the independence of the federal judiciary through brilliant legal arguments and skilled political maneuvering.

In Marbury v. Madison, Marshall led a unanimous court in securing the right of judicial review of the consitutionality of all actions of both the executive and congressional in a case that on the surface was a loss for the Federalists. In deciding the case against Adams' midnight appointments for lack of jurisdiction, Marshall makes the the Supreme Court the arbiter of consitutionality for all time to come. Jefferson had argued that consitutionality was the domain of all three branches of government, and in his Kentucky Resolution he contended that states could determine a federal law to be null and void if it was unconstitutional. Marshall's interpretation stands to this day.

Simon is one of the few scholars who sees Jefferson for what he was, a stalwart party man whose hyperbolic condemnation of his opponents though successful in the short term, was ultimately rejected along with his vision of America. Jefferson saw the United States as a loose confederation of powerful states, all pursuing a bucolic ideal of an agrarian economy that rejected banks, paper money, and all things industrial. Instead, the vision of Hamilton and Marshall, the chief representatives of the Federalists, comes to be. The industrial revolution takes hold in the Northeast and the backward looking vision of the agrarians is finally put to rest after the South's defeat in the Civil War.

In reading What Kind of Country, one comes to realize that Jefferson is not a true progressive visionary. In fact, he is the reactionary in this morality play. Industrialization was the future in the early 19th century; agriculture was the past. Jefferson, author of the Declaration of Independence and the Virginia Statute of Religious Freedom, envisioned a country of political freedom but economic and indealistic bondage to the land, which in point of fact, would never allow true political freedom.
Books