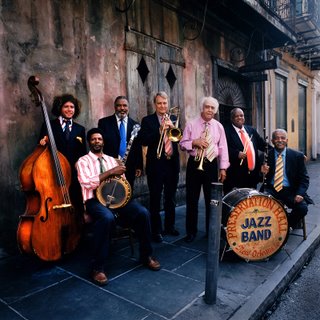 This evening Boston's Symphony Hall was transformed and its audience transported by the swinging sounds of the Preservation Hall Jazz Band who opened the 2006 - 2007 Bank of America Celebrity Series. The performance was classic New Orleans jazz, heavy on melody and improvisation and toe-tapping rhythms. Hand-clapping audience participation made the 2,371 seat hall feel like the most intimate of jazz clubs.

The concert opened with clowns from the avant-garde jazz street performance group The New Orleans Bingo! Show. Band Leader John Brunious wailed on his trumpet with Rickie Monie on piano in the first number. They were then joined by banjo player Carl LeBlanc and bassist Walter Payton in the second number, while drummer Joseph Lastie, Jr. and saxophonist Darryl Adams added further layers in the following piece. Finally, trombonist Frank Desmond completed the band for the classic tune Louisian-a. "Tiger Rag" quickly followed which had everyone tapping out the beat with a grin on their face. Vocalist Clint Maedgen was featured in a rousing version of "You are my sunshine," which his gravelly tenor made his own.

The first set was just a warm up for what was to come in the second half. Jazz giant Ellis Marsalis opened with three solo numbers that were almost classical is style with jazz syncopation and rhythm. It was a virtuoso performance that mesmerized everyone in the hall. The band then marched in like a classic jazz funeral style, dressed in white shirts and black ties. The finale had everyone—old men in bow ties, young women in jeans—on their feet clapping and waving hankerchiefs. No one was immune to the joy of that moment. When they slid into "When the Saints Go Marching In," everyone felt they were an honorary New Orleanian, if but for the length of a song.

Founded in 1961 by Allan and Sandra Jaffe, the Preservation Hall Jazz Band began touring two years later and have been on the road ever since. They have performed in major venues like Carnegie Hall and Lincoln center and for the British Royal Family and the King of Thailand. Players come and go, but the mission of sharing the unique sound of New Orleans jazz continues. The band first appeared in Boston in the 1972 Celebrity Series, performing every year since.

Hanging over this magnificent performance was hurricane Katrina and the devestation she wrought on the Big Easy last year. Each of the musicians in the Preservation Hall Jazz Band was affected by the disaster, several of whom lost instruments and were displaced from the city they love. Katrina's devastation makes tonight's concert all that more important. Bringing New Orleans jazz music to the world is a potent reminder of all that was lost and must be regained.
Music Performance