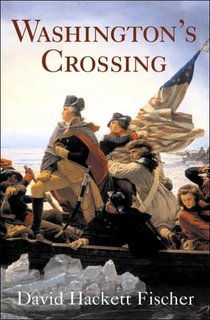 In Washington's Crossing, Brandeis University's Warren Professor of History David Hackett Fischer examines what was possibly the darkest time in American history, the fall of 1776. The 2005 Pulitzer Prize winner is another in the Pivotal Moments in American History series, of which Fischer is co-editor with Civil War scholar James MacPherson.

Though most Americans remember 1776 as the year of the Declaration of Independence, and Bostonians remember it for Evacuation Day when on March 17 Washington's Continental army drove the British from Boston. Those were the halcyon days, soon to fade. When Washington moved his army to New York to defend the city against the amphibious attack of the Howe brothers, the Americans could not withstand the onslaught.

Over the course of the late summer and fall, the Continental army is driven out of New York and across New Jersey. By December Washington's army is hardly an army at all. Just on the western side of the Delaware River in Pennsylvania, Washington conceives of a bold plan to boost the morale of his American bretheren. Thomas Paine lent his assistance, writing the inspirational pamphlet The American Crisis, famous for its introductory lines: "These are the times that try men's souls. The summer soldier and sunshine patriot will, in this crisis, shrink from the service of their country; but he that stands it now, deserves the love and thanks of man and woman." Robert Morris, designated financier of the Continental Congress, found a way to finance Washington's vision, even convincing a wealthy Philadelphia merchant to donate the gold buried in his backyard. Finally, local militia from New Jersey and Pennsylvania helped with a campaign to harrass the British and Hessian outposts.

When Washing crossed the Delaware on Christmas night to attack the Hessian outpost at Trenton, everything came together for the American. A blizzard shielded them view and encouraged the Hessian to relax for the first time in weeks. The American victory was the first in a series of victories that would restore the American cause, so recently moribund by defeat and retreat. The first Trenton victory, so minor in military terms, was followed by a second victory at Trenton and a further one at Princeton, these against General Cornwallis, one Great Britain's most successful military commanders. After a winter forage war conducted by American militia, all thought of a quick British victory had all but vanished. Washington was heralded even by the enemy as the ablest of generals, and the new American nation was prepared to defend their new found liberty until victory was complete.

Washington's Crossing is not just a popular history of a pivotal moment in American history. With over 150 pages of appendices, bibliography, and notes, this a work of serious scholarship. For lovers of military history, this will become a much loved tome. Fischer makes the battles come alive, turning what lesser writers might reherse with dull monotony into exciting, page turning adventure. No student of American history should be without this volume on the American Revolution.
Books