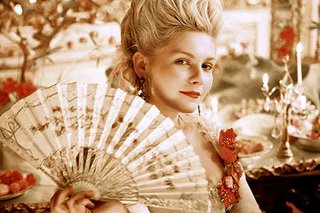 "Let them eat cake!" Possibly the most famous but fictional quotation in history has made an indelible mark on Western civilization. We are infatuated with Marie Antoinette, the Queen of France whose lavish lifestyle made her a target of the French Revolution. Sophia Coppola, famed daughter and feted director, encourages this infatuation with her new movie Marie Antoinette, which tells the story of Marie, from her marriage to the Dauphin of France at age 14 to her arrest at the hands of the revolutionaries.

Marie Antoinette is not your typical period film. Rather it is a modern take on the period. Gone are the stilted language, the restrained performances, and the relentless period music. Instead, Coppola's vision is of a twenty-first century Marie—bold, independent, and strong-willed—in gorgeous eighteenth century costume, though a pair of Chuck Taylor All-Stars worked their way into one shopping extravaganza. Kirsten Dunst embodies this new Marie, bringing her alive for today's audiences. She makes the audience feel for the young Dauphine who is rejected by her husband, pestered by her grandfather king's mistress, and mocked regularly by members of the court. As she grows more confident, drawing her husband into their marriage bed, swallowing her pride, and ignoring the whispered insults, she becomes even more the heroine of the film.

This is a lush and lavish movie, filmed on location at Louis XIV's monumental Versailles. From dresses to desserts, every object in the movie captures the luxury and opulence of the French court on the eve of revolution. Coppola captures the essence of Marie restrained life. Thro 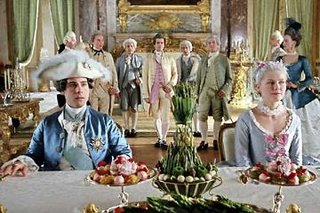 ugh her spare use of dialogue, which includes long silences punctuated by snippets of whispered conversation overheard by Marie, Coppola draws the audience into the movie as participants, not just oberservers. Like Lost in Translation, the pace in Marie Antoinette is deliberate, at times plodding. Coppola uses set pieces, like Marie and Louis dining together, to good effect, demonstrating both the passage of time and Marie's growth.

There are some significant problems with the historical accuracy of Marie Antoinette. With the exception of the "Let them eat cake" debacle, which Coppola assiduiously works to correct, she seems to accept the contemporary accounts of Marie's life, fueled by critics at court. The most prominent accusations concerned Marie's exorbidant spending—on things like clothes and a miniature village on the grounds of Versailles—and her sexual escapades. The latter is the most troubling. There is no historical evidence, other than polemics printed to embarrass the monarchy, to substantiate any untoward sexual conduct by Marie. In fact, Louis and Marie's love was true, and Louis refused to take a mistress. Without a mistress to attack (like Madame du Barry, Louis XV's mistress), the press set their sights on the queen, making her the object of their criticisms. Coppola not only accepts these accusations but concocts an affair that leads to the birth of the Dauphin, the lost Louis XVII.

Though disappointed by Coppola's historical treatment of Marie Antoinette, her film is a worthy entertainment, not least for the performances of its cast. Check it out.
Movies