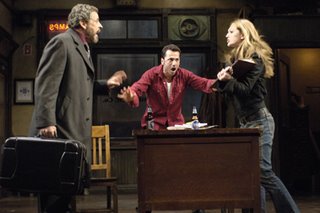 Who would ever have imagined that philately (stamp collecting for the uninitiated, like this writer) could be funny? In the hands of playwright Theresa Rebeck, philately is not just funny, it is laugh out loud hysterical. All it takes is a pair of half sisters brought together by the death of their mother, a couple of con men who love stamps almost as much as they love money, a philatelist nursing a serious grudge, and two misprinted stamps from the British colony of Mauritius.

There are three basic areas on which to judge any play: writing, acting, and set design. Get two of these right and chances are you have a hit on your hands. Mauritius nails all three. Rebeck's writing is tight, character driven dialogue. Her characters need no description, for they are apparent in the writing, the words they choose define them. The nebbish philatelist, the shady collector, the young con man, the survivor sister, and the broken older sister are each given their own defining vocabulary, cadence, and phrasing by Rebeck.

In addition to the writing are actors perfectly cast to their roles. Obie Award winner Marin Ireland leads the cast as Jackie, the younger sister who sees in the stamps and opportunity to overcome the horror of her past. Michael Aronov is frenetic as Dennis, the slick con man in 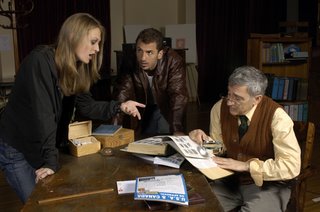 tent of retrieving the stamps for his boss Sterling played by James Gale. Nothing makes the word "fuck" sound so proper as Gales' English accent which manages to threaten and soothe. When Sterling and Jackie negotiate the sale of the stamps, it is absolute fireworks.

Robert Dorfman and Laura Latreile are convincing as the broken individuals who find strength enough to bring about their own con. Finally, the set design is both convincing and innovative. Special kudos to the lighting designer Paul Whitaker for his use of light during the the transitions from scene to scene.

Ultimately, it is the responsibility of the director to pull all of this together. Rebecca Bayla Taichman handles the chore with aplomb, She elicits from everyone, cast and crew, their very best performance. Familiar with directing Rebeck's works after staging The Scene, Taichman gave this world premiere what it deserved, a professional send off that should make it a piece sought after by theatre companies the world over.

If Mauritius is how the Huntingtin Theatre Company chooses to celebrate its twenty-fifth anniversary season, I'm phoning in my subscription today.
Performance

Anonymous said…
While these outcomes had been largely inconclusive, the same authors followed up with a second study (Nacke et al. 2010), in which they examined psychophysiological response to sound on versus off in video games. Neither electrodermal exercise nor facial electromyography had been influenced by the sounds of the sport. It 카지노 사이트 should be famous, nevertheless, that only tonic measurements had been recorded.
9:24 PM