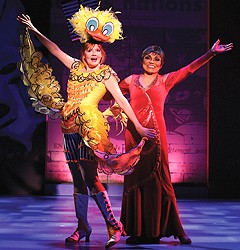 There are, in this world, certain legendary icons you must see before they are gone. The list of those I have missed in my lifetime is enormous, but I am on a mission to catch some of the greats before it is too late. Recently, I was lucky enough to see Eartha Kitt, a grand diva of the old school, in the off-Broadway musical Mimi le Duck. I was ready to pay just about anything to hear her sing but a single song. At seventy-nine, one has to wonder how many more shows Kitt will be performing. It mattered not whether the show was actually good. What mattered was hearing that famour purr and witnessing her magnificent stage presence.

Needless to say, Earth was a smash, an age defying beauty, singing three numbers, which included the sexy and sulty "It's All About Sex" and the melancholy "Everything Changes." Who else could sing these words and send a shiver down your back? "One time at Monmartre, I drank gin with Sartre. We made love in daylight. We had nothing to hide. Now Ernest and Truman and Henry and Ezra, there's no one left. They grow old, then they die. Though no one has promised that I'd live forever. I never believed that my youth could be gone. Everything changes, evolving and shifting, moving and drifting. While time is marching, eveloving and shifting, moving and drifting. The mirror tells the truth, my time is marching on." Diana Hansen Young must have written the song for Eartha, not just her character.

Mimi le Duck is a gem with original story telling, wonderful music, and a talented cast led by Kitt. Miriam (Annie Golden) is a Mormon housewife who lives in Ketchum, Idaho paints ducks for QVC. Miserable, she decides end her life but is stopped by the ghost of Ernest Hemingway (Allen Fitzpatrick) who must prevent someone from committing suicide as he did in order to move on in the next life. He sends Miriam to Paris to find her inspiration. There she meets Madame Vallet (Eartha Kitt), a retired cabaret singer who runs a boarding house, a Spanish gypsy pickpocket, a sculptress unsullied by money, and an oyster shucker who wants to solve Agatha Christie murder mysteries. Here she becomes Mimi le Duck, the very opposite of Miriam.

Mimi le Duck is a beautiful modern day fable for the middle aged, because it is all about self-discovery. This is not the angst filled sturm and drang of adolescence but something different. This is the self-reflection of crisis. Miriam sees her life as meaningless, which is ever so slightly melodramatic yet not unrealistic. As she searches for her own inspiration, she becomes an inspiration to all of those around her. Imagine what a wonderful world it would be if more people would take off for Paris when they tire of their humdrum life? Mimi le Duck is a triumph and deserves a much longer run. If only there was another Eartha Kitt-like star to fill the role of Madame Villet.

Anonymous said…
Very cool that she is still performing and that you got to see her. I've caught a few great performers in their late-in-life performances: Sarah Vaughn and Nina Simone. It is better, I've realized, to go sooner. Nina's voice had seen much better days. But it was still a thrill to see her at the Boston waterfront venue.
10:56 AM