The Glass Books of the Dream Eaters 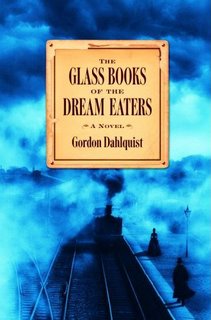 While reading Gordon Dahlquist's debut novel The Glass Books of the Dream Eaters, one is filled with the sense of being transported to a different time, not just in the timeline of the novel but in the wirting as well. It feels like the pure Victorian gothic of the nineteenth century serialized novel, worthy of Edgar Allan Poe, almost but not quite. It has all the requisite parts, compelling characters each with their own different motivation, a twisted plot, and an alchemical process that fundamentally changes the the moral character of the people and psyche of those whowillingly or unwillingly suffer throught it. Add to this murder, mayhem, and a mystical pregnancy and you have the formula for the suspenseful thrills of the classic gothic novel with a modern twist.

The forces of good, at least for the purposes of this novel, are a triumvirate of misfits drawn together by common cause against an unknown enemy. Celeste Temple is a provincial girl of wealth just come to London from her Carribean home to find a husband; we meet her in the throes of grief from having been dumped by her fiancé without a whiff of an explanation. Cardinal Chang is a man who gets things done, for the right price; he first spots Celeste on the train returning from an assignment to assasinate an dragoon colonel. Doctor Abelard Svenson is the medical escort (and spy) to the Crowned Prince of the German duchy of Macklenburg. When his prince disappears and he discovers a blue glass filled with others' memories, he teams up with Temple and Chang to find his charge. As each pursues their own ends, they find themselves more closely united to one another against a cabal of power-hungry aristocrats, government officials, and prostitutes who have discovered how to drain memories (particularly memories of the sexual variety) into books of cobalt blue glass which can then trap their readers, leaving them at powerless before the will of the cabal.

The difficulties of Glass Books are two-fold. First the length, which has been a common complaint; it is well over 700 arduous, overwritten pages. Second, as one friend said, the book is all middle. If a good story has a beginning, a middle, and an end, Glass Books lacks the former and the latter. Yes, we do learn about our protagonists throughout the book, the fact remains that the novel begins with Celeste's dumping and and subsequent adventure. As for an ending, there are enough loose ends to weave a Persian rug of the most complex detail and highest quality.

The Glass Books of the Dream Eaters reads like a screen play just waiting to be produced. (Which makes since as Dahlquist is a playwright by trade.) The visuals would be stunning, and the SFX guys would have a field day. In fact I can't wait to see it! As for reading it, if you can get through the first thrid, you might just be sucked in enough to finish. Then again, maybe not.
Books