I have said it before and I will say it again: Quentin Tarantino is a genius, and Robert Rodriguez is no slouch. Grindhouse, which released in US theaters April 6, is an absolute work of art. Though box office receipts have been disappointing, it says nothing about the film. First, this is a film lover's movie. Tarantino and Rodriguez have created an homage to the 70s double feature of exploitation genres--splatter, sexploitation, zombie, cannibal, women in prison, and other films.
T&R created two films for Grindhouse, Rodriguez's zombie film Planet Terror and Tarantino's slasher Death Proof. Planet Terror is typical

zombie fare, a bio-weapon gone terribly wrong, a government conspiracy, and a group of disparate survivors fighting for their lives. Bruce Willis plays the army commander whose unit was first infected with the DC2 gas, Rose McGowan is Cherry the go-go dancer who loses a leg to the zombies, which is replaced eventually with a M4A1 assault rifle, and Freddy Rodriguez plays El Wray who becomes the leader of the band of survivors. In Tarantino's Death Proof, Kurt Russell is a Stuntman Mike, a sadistic killer who stalks young women, using his death proof stunt car as his weapon of choice. After killing five women in Texas, Stuntman Mike escapes to Tennessee only to meet his match in four Hollywood film workers, including two stunt women including real life stuntwoman Zoe Bell.

The genius of Grindhouse is in T&R's ability to recreate the cheesiness of exploitation movies as well as the poor quality of the physical film itself. On the big screen, Grindhouse looks like a film that has been shown over and over so often it is damaged, at times beyond recognition. Both movies have missing reels at the end of the second act, leaviing viewers wondering about the d 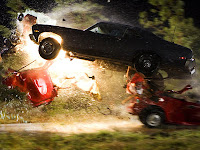 etails that they missed (but still able to follow the story). In Death Proof there are actually ten seconds where the screen just says 'Reel Missing.' There are also the internal inconsistencies like the use of cell phones in a movie that otherwise feels like it was filmed in the 1970s. Even in the story-telling itself, Grindhouse lacks the character development and emotional depth associated with good film making, but the visuals are compelling because they titillate and transfix the viewer.

Like the original double features found in grindhouses, the movie includes trailers and advertisements. Some of the best work on Grindhouse is in the fake trailers. Machete, Werewolf Women of the SS, Don't, and Thanksgiving are hysterically funny, zeroing on what made the exploitation genre so compelling, the advertising. The fake trailers were directed by some of today's most creative directors including Rodriguez (who wrote Machete in 1993 as a feature film), Rob Zombie (House of a 1000 Corpses), Eli Roth (Hostel) and Edgar Wright (Shaun of the Dead). There is even talk of making a couple of these into a Grindhouse II.

What makes Grindhouse standout from most of the exploitation genre is that like Tarantino's Kill Bill, this is a movie that empowers women. They are not only equal to men, but in fact, they are stronger than the men. It is Rose McGowan in Planet Terror who becomes the leader of the surviving humans, and Stuntman Mike gets his just desserts from three women. Though many will complain about the post-millenial violence, few can complain about its treatment of women.
Movies