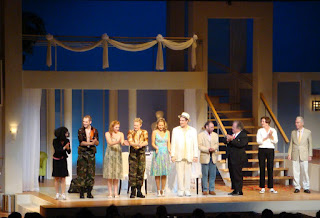 Last night was the final performance of Mozart's classic comedy Cosi fan tutte, K. 588 under the baton of Maestro James Levine. at the BSO's Tanglewood Music Center. Playing to a packed house, the orchestra sounded tip-top and the vocal fellows carried off the task with aplomb. With a very modern, Miami Beach-like set designed by John Michael Deegan and Sarah G. Conly and the superb direction of Ira Siff, it was a Cosi to remember.
In this silly romp, the opera opens with two friends Ferrando (Chad A. Johnson) and Guglielmo (Matthew Worth), singing the praises of their faithful girlfriends Fiordiligi (Layla Claire) and Dorabella (Sarah Austin) when don Alphonso (Giles Tompkins) bets them that the girls will abandon their fidelity within a single day. The boys take the bet, and Don Alphonso recruits Despina (Kiera Duffy), the girls' maid, to help him convince Dorabella and Fiordiligi to abandon their fiances. The boys leave their faithful girls, supoosedly with their army reserve unit, only to return as nattily dressed foreigners, set to woo each other's fiance to test their fidelity.

The wooing is delightfully funny, especially with Siff's perfectly timed direction. Ferrando and Guglielmo, dressed in homage to Steve Martin's "Two Wild and Crazy Guys," almost steal the show, but it is Despina, particularly the disguised Despina (she plays a hippie doctor and a New York lawyer), who pushes the entire show right over the edge into hilarity. Musically this is Mozart at his peak with sweet melodies and vibrant strings, and everyone deserves a wonderful Cosi like Tanglewood's.
Performance