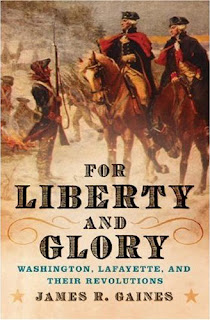 I met Jim Gaines two years ago in Bethlehem, Pennsylvania. He was there to speak at the Bach Institute at Moravian College (which I was attending) where his first book on the historic meeting of Frederick the Great and Johann Sebastian Bach, An Evening in the Palace of Reason, served as historical background for the Institute. Gaines used the time to conduct research on the Marquise de Lafayette and his time in Bethlehem. After defeat at the Battle of Brandywine, Lafayette was injured and spent his recovery in Bethlehem under the care of the Moravians, who though pacifists, supported the revolution by caring for the wounded Americans.

Finally, Gaines' research has come to fruition in the form of a second book, For Liberty and Glory: Ashing, Lafayette, and their Revolutions. Rarely do I recommend a book before reading it, but after a single chapter, I must say, go buy this book. Jim is a great writer with isnightful reflections and a genuine love of his topic, and his research is impeccable, with forty-eight pages of notes and bibliography. Here's a quick quote to peek your interest:

"Finding themselves leading the struggle for the basic human right to become something other than what we are born to be, Washington and Lafayette, in their very different ways, had to fight for their own independence, and to watch them as they did that—making their way from courtier-subjects in a hierarchy of blood and privilege to patriot-citizens in a commonwealth of equals—is one way to see a radically new world being born, a world in which the value of a life is not extrinsic and bestowed but grounded in self-respect, something that can be earned by one's own effort and that might be lost but cannot be taken away."

I will be posting a review as soon as I have finished reading.
Books