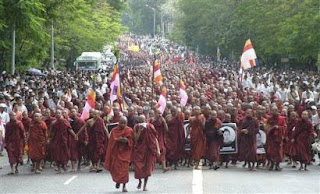 Tensions are building in the Southeast Asian country of Myanmar (formerly Burma) where Buddhist monks are leading protests against the ruling military junta. Building over the last several days, the Associated Press estimated that the crowds swelled to over 100,000 yesterday, prompting a reaction from the junta's minister for religious affairs. According to the New York Times, the dictators are threatening "unspecified action" against the monks if they do not reign in the demonstrations. Student protests in 1988 were ended following the violent deaths of 3000 student protesters.

Today the demonstrations in Myanmar were center stage at the United Nations General Assembly where Secretary Ban Ki-moon called for restraint from the rulers in Yangon (Rangoon), while President George W. Bush condemned the "reign of fear" and threatened new sanctions on the Asian nation.

There is a certain sense of de ja vu, which is not encouraging. The last time demonstrations in Myanmar reached these proportions, they were brutally crushed by the military. There is little that intimates something different may happen this time around. To cede even a little, a single compromise, to the protesters would be a sign of weakness and thus the beginning of the end. Though this demonstration may also end in violence, it could be the catalyst to continued protests and even revolutions. It is all down to the will of the monks. As long as they are willing to support the demonstrations, even in the face of violence and death, it will steel the people to final exert their will over a military junta that may be the worst human rights abusers in the world.

UPDATE: The violence has begun. The BBC has a great article comparing the Burmese government to that of Suharto's Indonesia here.
Current Events