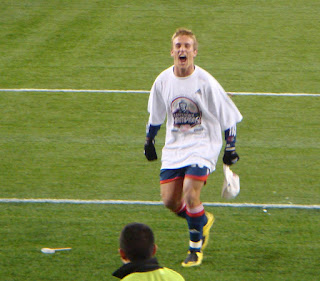 One - nil is rarely an impressive score, but the goal that put the New England Revolution in from of the Chicago Fire, and clinched the Eastern Conference Championship, was a peach. Even fans of that other team who play at Gillette Stadium in Foxborough, Massachusetts will have to admit that Taylor Twellman's 38th minute strike, an overhead bicycle kick from between two Fire defenders that left goaltender Matt Pickens scratching his head wondering what had just happened. Certainly the goal was Twellman's best of the season, maybe even the best of his quite productive career.

With Matt Reis in goal for the Revs, fronted by MLS Defender of the Year Michael Parkhurst, Jay Heaps, and Avery John, the single strike was enough to coach Steve Nicol's lads through to the MLS Cup for the third straight year. Though the Fire looked sneaky and had their chances, Reis was in fine form and his teammates looked ready and willing to sacrifice themselves for the win. Wells Thompson looked especially dangerous, tracking back to play defense and shooting up the wing to cross balls into the middle, including the one Twellman eventually converted for the game winning goal. 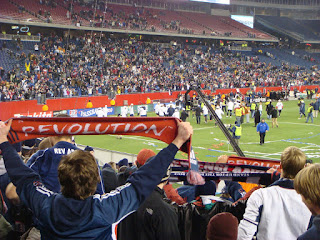 After winning the Lamar Hunt US Open Cup last month against FC Dallas, the Revs are poised to win the double. Is this the year? Fans hope so. They were in fine form last night, singing and shouting, and doing everything they could think of to torment the Fire's star striker Cuauhtemoc Blanco and keeper Pickens. The ref, Kevin Stott, was the object of the crowd's ire as he fell for every one of Blanco's dives, but refused to acknowledge the elbows Steve Ralston, Pat Noonan, and Twellman were enduring from the Fire defenders. All in all, it was a hard fought victory, deserved for a supreme effort that countered the hottest team in the MLS (the Fire had not lost a game since September) who had just knocked off DC United, the league's best team in the 2007 season. Now fans just have to wait to see who they will beat on Sunday, November 18 at noon at RFK Stadium in DC. You too can watch the Revs win their first Cup on ABC and Telefutura.