Some thoughts on the election so far

Posted by Unknown on February 09, 2008
A friend send me a message saying this was "the most dynamic and interesting presidential season in my lifetime" and asked for my thoughts. Here they are.

I agree that this is the most exciting election in, well, my life time too. I have to be honest, as a Republican, Obama scares me just a little, because people find him so inspirational (even though he rarely says anything as pragmatic and policy based). He is bringing many people into the political proces 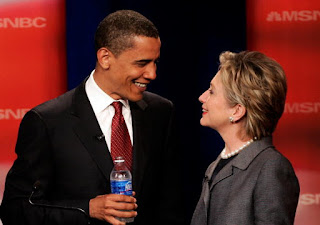 s that have never been involved. One of my former students the other day went to an Obama rally in Boston. He spent four hours in the cold waiting to get in and only to join a crowd of 20,000 and just barely to glimpse the man, but he loved it none the less. He has never been interested in politics before, and now he is trying to convince me to support Obama.

Hillary on the other hand is organizationally brilliant but incredibly polarizing. I prefer her because she is beatable. I am still convinced that her tears in New Hampshire were contrived, as is everything about her and her "husband". Every time she talks about her "35 years of experience" I cringe to think that eight years as First Lady and a bungled health care initiative qualifies one for the highest office in the land.

I was supporting Mitt Romney until he dropped out this past week. I liked him as Governor of Massachusetts and appreciate his outside the beltway business background. I think being Mormon hurt him tremendously, especially with Huckabee offering Christian fundamentalists a more comfortable choice. It seems that religious bigotry is alive and well. I also think it hurt him that he had to move to the left in order to be a viable candidate in Massachusetts. I always thought he was more conservative personally than he was allowed to be publicly in the bluest state in the Union. 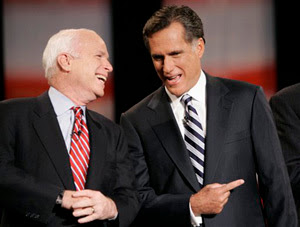 As far as McCain, I think conservatives dislike him because of immigration and his knack for sponsoring legislation with the most liberal members of the Democratic party (think Feingold and Kennedy). His maverick status scares them (as it does me a little). I think many fear that he could become another Judge Warren, conservative until he achieves the pinnacle of power and then going off the deep end.

I think the reason Romney dropped out of the race was to begin to unite the GOP around a single candidate, which is McCain. He even challenged Huckabee to drop out as well. Will Republicans rally around a war hero? Probably. I think what can motivate them most, though, is not McCain himself but Hillary. Should Clinton get the nomination, the Republican base will swing into action to defeat her. Should Obama win, they might just sit on their hands.

President McCain: "For my first 100 days, I will put a day-after abortion pill in the hand of every teenager in this great land!"

Conservatives (all together): "Dang!"

By the way, I am glad you are getting on so well in Valley Forge.