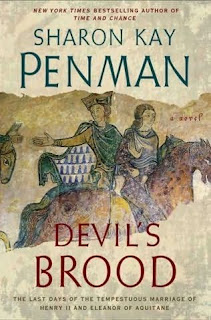 When I was little, of the many things I wanted to be when I grew up, it was a medieval knight. The closest I ever came was playing an archbishop in my sixth grade's renaissance fair. This childhood desire may explain why I so love Sharon Kay Penman and her newest book Devil's Brood.
This third in the trilogy on the life of King Henry II of England, Eleanor of Aquitaine, and their children, Devil's Brood brings to an end Henry's reign, but not without relating a decade and a half of fireworks that animated life in England, Brittany, Normandy, and Aquitaine as Henry's three eldest sons--Hal, Geoffrey, and Richard--rebelled against their father time and again. Support by the mother in the initial rebellion, Eleanor would suffer the brunt of Henry's anger, spending the next fifteen years of her life a prisoner in the ever more gilded cage as she moved from castle to castle on her husband's orders.

I first discovered Penman's writing in her medieval mystery Cruel as the Grave. After reading just about everything she has written, I find myself eagerly awaiting her next publication. It is her ability to capture the medieval world, based on her painstaking research, that make her works so readable. There is more though. She has an uncommon ability to remain neutral in her story-telling. In Devil's Brood, I found myself sympathizing with each of the characters (well, maybe not the French) in turn. I understood why the sons rebelled, why Eleanor supported her sons over her husband, and why Henry tried to hold so tightly to his sons, ultimately causing what he most wanted to avoid.

Penman's Henry is a tragically flawed individual. When his own blindness caused his sons to rebel, I was astonished at his inability to analyze the political situation before him as he had done when his other barons had rebelled at one time or another. When, in the midst of their rebellions, first Hal and then Geoffrey die early and unnecessarily, I understood Henry's sorrow. When he died, agreeing to be shriven by a priest only to avoid spending eternity in hell with his son Richard, my heart broke for a father who felt betrayed after orchestrating his own betrayal.

If there is one character Penman favors, it is Eleanor of Aquitaine, the fiery queen-cum-duchess-cum-queen who is a reminder that though the medieval world was one dominated by men, their were powerful women who found ways to influence their world. Constance, Duchess of Brittany, wife of Geoffrey, daughter-in-law of Henry and Eleanor was another such individual, and so was the Empress Maude, King Henry's mother. Penman captures each of these women in all their glory but in all their male dominated weakness too.

Possibly the most exciting line in the book came at the end of the author's note where Penman promises to continue the saga of Eleanor of Aquitaine, Richard the Lionheart, and all the rest. I can't wait!