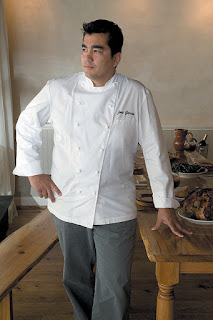 So Tuesday night I went out with a friend for a belated birthday dinner. We chose Amada in Old City, Philadelphia, namely because Chef Jose Garces' name keeps popping up, most recently in the Food & Wine Thanksgiving issue. Amada offers Philly's most creative interpretation of Spanish tapas, so after being seated, we opted for the chef's tasting menu. Though they only advertise a $45 three-course tasting, they offer ones for $55 and $65, which just increases the quality of the ingredients used in the dishes.
The first course was defined by sweetness, so I was on board immediately. It helped when everything started with a trio of cheeses and their accompaniments--aged manchego with truffled lavender honey, garrotxa with garlic dulce de leche, and cana de cabra with fig and strawberry marmalade. The cheeses were quality, but the dipping sauces were exquisite. Next was oysters with grapefruit and cava granita; sweet but not cloying. Finally the salad of spinach, cabrales, fig, and spiced almonds was encased in Serrano ham. A salad wrapped in 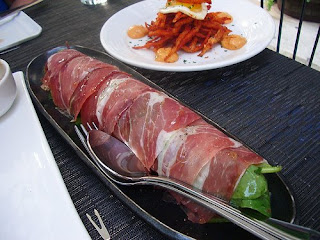 pork; it doesn't get any better.

The second course began with octopus and sweet breads, and I have to admit that I was nervous. Octopus is not my favorite because most preparations ruin the texture; too often it's like chewing rubber bands. These baby octopi were tender and perfectly seasoned, served sizzling and delicious. The sweet breads were something new. Offal is by no means a favorite, unless you're talking foie gras. Garces' preparation of the sweetbreads were a pleasant surprise, matched with chestnut pappardelle, iberico ham, English peas, and fava beans. The course ended with the coca or Spanish flatbread with duck confit, Serrano ham, cabrales, and date glaze. It was refreshingly familiar after the first two dishes.

Now understand, two hungry guys, and there was still something left on several plates from the first 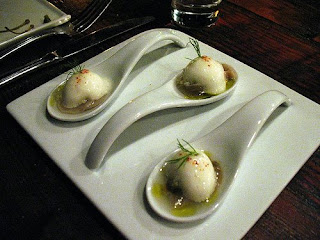 two courses. The third and final course was the piece de resistance, with three proteins that simply knocked our socks off. First, Alaskan king salmon, crispy baby artichokes, and topped with and orange saffron foam. Next was prime sirloin sliced in bite sized pieces on a bed of spinach with a goat cheese mousse. Lamb chops marinated and grilled to perfection completed the triptych of meats. For vegetables, the chef offered seasoned wild mushrooms and grilled asparagus with truffles and a poached egg. It was more than enough to share, and we were both filled to bursting by the time we surrendered. Dessert was little more than a afterthought; more like reconnaissance for next time.

The service was pleasant and the wait staff knowledgeable and helpful. They appeared when needed and disappeared just as quickly. The restaurant is larger than expected on first inspection with two dining rooms and a great bar, separated from the dining rooms. The wooden tables and comfortable banquets offer a homey feel that makes it easy to relax and enjoy your meal. Whether you choose the chef's tasting or just order a couple of things a la carte, Amada is worth your time and hard earned pennies.
Restaurant