Anne Rice's Called Out of Darkness 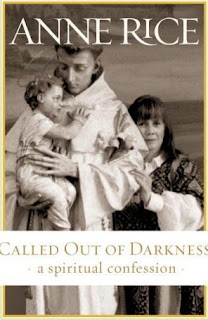 This fall, Anne Rice published her spiritual autobiography, following in the venerable tradition of St. Augustine of Hippo, St. Teresa of Avila, Thomas Merton, Dorothy Day, and Henri Nouwen. I have written in this blog about Rice's new series of books on the early life of Jesus Christ, beginning with Christ the Lord. These new books are a result of Anne's return to faith and the Roman Catholic Church.
In Called Out of Darkness, Rice tells her own story of faith, loss, and return. From growing up in the insular world of pre-Vatican II Catholicism in New Orleans to abandonment of all pretense of faith and the embrace of atheism and secular humanism in college, Rice's story is touching and heartfelt. She reveals how important faith was to her as a child and how in a single moment it was gone. When she walks away from everything she has ever known, I was broken-hearted but for the knowledge that she found her way home.

Anne's return was in response to the love of Christ that never stopped pursuing the her. Returning to the modern Church, with all its faults, was an act of will and complete abandonment.

"In the moment of surrender, I let go of all the theological or social questions which had kept me from Him for countless years. I simply let them go. There was the sense, profound and wordless, that if He knew everything I did not have to know everything, and that, in seeking to know everything, I'd been, all my life, missing the entire point.

"No social paradox, no historic disaster, no hideous record of injustice or misery should keep me from Him, No quesion of Scriptural integrity, no torment over the fate of this or that atheist or gay friend, no worry for those condemned and ostracized by my church or any other church should stand between me and Him. The reason? It was magnificently simple: He knew how and why everything happened; he knew the disposition of every single soul.

"He wasn't going to let anything happen by accident! Nobody was going to go to Hell by mistake. This was His world, all this! He had complete control of it; His justice, His mercy--were not our justice or our mercy. What folly to even imagine such a thing.

It is always instructive to understand why others believe. Reading Anne Rice's tale of return, especially for those who love her books, is not just informative and enlightening, especially for all those who struggle with the flaws that are rampant in a Church filled with imperfect human beings.