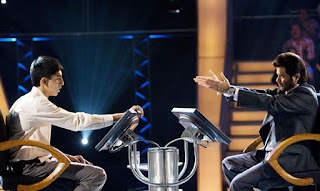 Normally I try to ignore buzz. Whether it is a book, restaurant, CD, or a movie, buzz is often a better indicator of what not to seek out. With Slumdog Millionaire, the buzz is not just understandable, but it does not nearly convey how wonderful this movie is.
Distributed by Fox Searchlight, the art house, indie arm of Fox Pictures, Millionaire is a story of crushing poverty, betrayal, abandonment, violence, perseverance, redemption, and enduring love. There are so many potential pitfalls for a movie like this to become a cheesy romance that it is a wonder it got the green light at all.

Director Danny Boyle (Trainspotting, 28 Days Later) brilliantly utilizes the storytelling mechanism of Vikas Swarup's novel Q&A, where the main character is accused of cheating at a quiz show and explains to police that he learned the answers to the questions asked by living your life. In Millionaire, Jamal's flashbacks are filled with the juxtaposition of the poverty of the 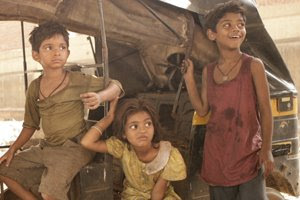 slum, the magnificent colors of the saris, and the carefree movement of youth. Added to the original novel is the love story at the center of Slumdog Millionaire that animates then entire film; it is a love that Jamal's brother Salim impedes at every turn in vain attempts to exert his authority as head of the family, forcing Jamal to search continually for the love he discovered and lost as a child.

Millionaire is an ensemble accomplishment like few movies today. The children in the early part of the film deserve great credit for their potrayal of carefree happiness in terrible circumstances. They are so likeable and easy to watch that they draw the viewer into the movie from their first scences. Dev Patel, the English-Indian actor and veteran of the BBC's Skins, is the present day Jamal, the thread uniting all three time lines whose sympathetic portrayal of the chai-walla who becomes a contestant on Hindi Who Wants to the a Millionaire in order to find the love that he lost. Frieda Pinto who plays Latika, 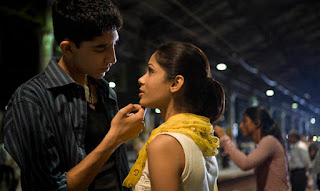 Jamal's love, is gorgeous and though her appearence is brief, one look at her and you hope they get together in the end.

Ensemble acting, Danny Boyle's direction, and Simon Beaufoy's screenplay are a near perfect recipe for four. the Golden Globes. Add to these the bumping sound track from A. R. Rahman and MIA, and the recipe is complete.