Dennis Lehane's The Given Day 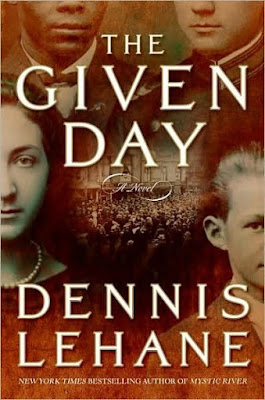 I finally started reading Dennis Lehane's new novel, The Given Day, and I must admit it is brilliant. It had been sitting in the car since Christmas when I got it, but I am so glad I finally started reading it. I It is about the 1919 Boston policeman's strike, the flu epidemic that proceeded it, the radical politics, the Red Scare, race relations, Babe Ruth, the Great Mollasses Flood, and much, much more.
heard Lehane do a reading from the manuscript in October 2006, and he said that one of his greatest joys as a writer (and I'm paraphrasing here) is the fact that he has a contract with his publishers that allows him to write anything he wants. He is not expected to produce the same formulaic novel over and over again like so many other writers today. This freedom has allowed Lehane to publish the Patrick Kenzie/Angela Gennaro novels (including my favorite Darkness, Take My Hand), the novel cum Hollywood blockbuster Mystic River, the gothic novel Shutter Island, and the short story collection Coronado. Now an historical novel set after the First World War. This freedom keeps Lehane's writing fresh, vivid, and emotionally charged. Below is a perfect example of Lehane's abilities as a wordsmith, not to mention an historical researcher.

"Hey." Finch's tone was sharp, his eyes too clear. "You say 'Bolshevicks' or 'Communists' like there are nuances here the rest of us are too thick to grasp. They're not different--they're fucking terrorists. Every last one. This country's heading for one hell of a showdown, Officer. We think that showdown will happen on May Day. That you won't be able to swing a cat without hitting some revolutionary with a bomb or a rifle. And if that occurs, this country will tear itself apart. Picture it--the bodies of innocent Americans strewn all over our streets. Thousands of kids, mothers, workingmen. And for what? Because these cocksuckers hate the life we have. Because it's better than theirs. Because we're better than them. We're richer, we're freer, we've got a lot of the best real estate in a world that's mostly desert or undrinkable ocean. But we don't hoard that, we share. Do they thank us for sharing? For welcoming them to our shores? No. They try to kill us. They try to tear down our government like we're the fucking Romanovs. Well, we're not the fucking Romanovs. We're the only successful democracy in the world. And we're done apologizing for it."