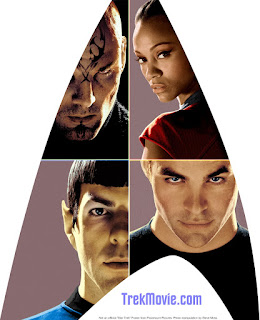 JJ Abrams is a genius. The new Star Trek movie is a romping good time because above and beyond the flash and bang of the special effects (and there is lots of flash and bang), there is a complex story worthy of a sci-fi enterprise (pun intended) that has lasted six television series and now eleven movies. Like Wrath of Khan, the new Star Trek has real movie making, exploring the characters psychologically while maintaining a level of action to suit average viewers.
The difficulty in making the Star Trek prequel has long existed because movie making technology has advanced so since the original 1966 tv show. Post-George Lucas sci-fi movie making renders the special effects and design of the old series so uninteresting (except to trekkies and trekkers) as to make a prequel impossible. How then to over come this technical difficulty? A rip and space-time continuum, of course. This is "science" fiction after all.
Abrams and his writing team solved the difficulty by creating a parallel universe in which events in the original Trek universe have caused a new time line. In this new universe, things are more advanced, James Tiberias Kirk has never known his father, and Spock assumes command of the Enterprise after the captain leaves to negotiate with Romulans who seek the destruction of the Federation. 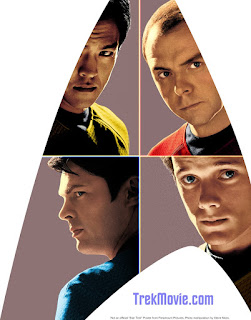 What is most fun about this movie is Abrams introduction of the original crew of the Enterprise. We meet Kirk and Spock on their own and children (Kirk stealing a vintage Corvette and driving it off a cliff and Spock pummeling another boy who called his father a traitor) and then again as they make their decision to join Star Fleet Academy. (Each requires some prodding.) Then Uhura is introduced when Kirk tries to pick her up at a bar. His infatuation with learning her first name is a running gag throughout. Dr. McCoy is at his melodramatic and hysterical bestfrom the first moment he meets Kirk on the transport to Star Fleet Academy. Checkhov and Sulu we meet later on the birdge of Star Fleet's newest flag ship, the Enterprise commanded by Captain Christopher Pike. (Yes, from the two part series in the original television show.) Chekhov is a seventeen year old genius and Sulu rocks with a futuristic katana. Finally, Scotty joins the fray last, bringing much needed comic relief.
With the original crew together, and Leonard Nemoy's Spock Prime lending is wisened advice, the Enterprise sets off the confront the Romulans and save the earth. Would you expect anything less from a Star Trek movie? I will definitely see this again. Go now, and go often. I want to see more movies from JJ Abrahams, Chris Pine and the rest of these young stars, and another Star Trek movie somewhere down the line wouldn't be bad either.