Eating Your Way Across The Crescent City 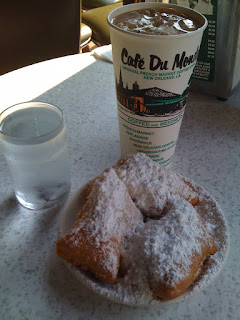 New Orleans has been one of my favorite American cities since before I even visited. Having spent the last few days there again on my third trip, I am renewed in my belief that this is one of the greatest culinary cities in the world. So far, I have nearly confined myself to destination eating...testing out the great restaurants that everyone raves about.
Every culinary tour of NOLA needs to begin at Cafe du Monde. This Jackson Square stalwart offers just one thing, the heavenly French donuts known as beignets. Dusted in a mountain of confectioner's suger, these delicacies, paired with a cafe au lait, are as good as anything you will eat in New Orleans. Monring, noon, or night, there is nothing like a beignet.
In addition to my daily sojourn to Cafe du Monde, I sampled for different first rate Crescent City eateries. My first night I went to Emeril Legasse's NOLA. Now there are those who are Emeril haters, though I find his TV personality grating, I love Emeril's cooking. My first trip to New Orleans I sampled Legasse's fare at Del Monico's, and it was one of the best meals I have ever enjoyed. At NOLA I start with BBQ shrimp, an Emeril special, with a side of cheese grits, then had a braised short rib to die for with Brie Cream "Mac & Cheese" and honey baked white beans. It was my kind of meal, not a green vegetable to be found. Coupled with a beautiful Petite Syrrah, I could not have asked for more. Dessert was a chocolante bourbon pecan pie with sweet potato ice cream and caramel drizzle. The cloying sweetness of the pie was nicely balanced by the ice cream which should remind any good Southerner of grandma's sweet potato pie. All in all, NOLA was everything I have come to expect from Emeril Legasse: creative cooking with local flare and quality ingredients. 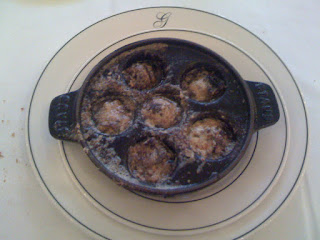 The second dining experience came at Galatoire's on Bourbon Street. One of the oldest establishments in the French Quarter, Galatoire's is still a family run affair the closely guard its ancient recipes. Jackets are still required for gentlemen, and the tuxedo clad waiters are some fo the best in the business. This slavishness to tradition makes for a wonderful experience in the dining room, but the food is second rate. I began with the escargot bordelaise, one of my favorites. It was spot on perfect. Unfortunately, the Pompano with crabmeat Yvonne was seriously disappointing. Though well cooked, it was pedestrian. Even the wine was m'eh. Steeped in tradition, the lack of creativity at Galatoire's broke the illusion I had of traveling back in time. Culinarily, I'm too attached to the present.
Commander's Palace, on the other hand, was one of the highlights of an illustrious dining career 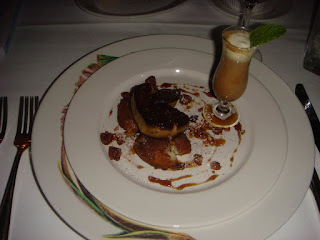 . Though as old as Galatoire's, Commander's is no where near as stuffy. Upon sitting down, I was greeted by two waiters and a captain who saw to my every whim throughout the evening. Lally Brennan, the owner of this Garden District landmark, made her rounds through the dini
ng room, stopping to talk for several minutes in a genuine conversation that made me feel welcomed and wanted. After a refreshingly dry Bombay Sapphire martini (with a twist of course), I dove into what can only be described as one of the most decadent appetizers of all time, the Foie Gras "Du Monde," a tribute to everyone's favorite riverside donut stand. A sauteed lobe of Hudson Valley foie is placed over a bourbon briased fig and foie gras beignet with vanilla cracked coffee beans, foie gras cafe au lait and chicory coffee mist. 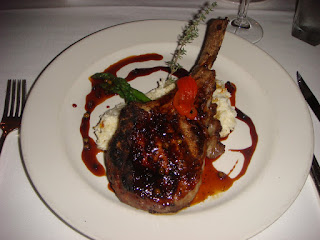 Though the foie was a tough act to follow, the kitchen a Commander's Palace continued the decadence with a fourteen ounce veal chop that was nearly two inches thick. Paired with asparugus and resting atop a bed of grits and goat cheese, the chop was as delicious as it was beautiful. A hot summer day demanded an appropriate wine, and petite syrrah rose did just the trick, with enough complexity and body to stand up to the veal, but the lightness to be quaffed with abandon. The meal ended with the "Queen of Creole Desserts," Commander's bread pudding souffle. It was lighter than any bread pudding I have ever sampled, with just a hint of spice to make it nice.
What would a foodie tour of New Orleans be without Bananas Foster? Incomplete. Another of 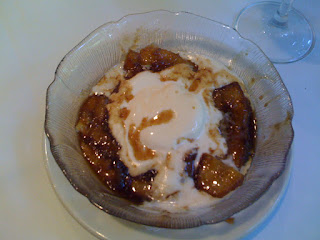 the old establishment restaurants, Brennan's in the Quarter is the spot for brunch, so I stopped in on my last morning. This is another place bound by tradition, but not yet moribund. My waiter informed me that the house tradition is to buy a drink for solo diners, so my brunch began with a mimosa to kick things off. I then proceeded to devour a three course breakfast that included a Southern baked apple with double cream, the Brennan's original Eggs Hussard (poached eggs atop Holland rusks, Canadian bacon, and Marchand de Vin sauce, all topped with Hollandaise Sauce), and finally Bananas Foster. Created in 1951 at Brennan's, this world famous dessert is bananas sauteed in butter, brownsuger, cinnamon and banana liqeuor and then flamed in run and served over vanilla ice cream. Some might say Bananas Foster is New Orleans in a bowl.
Restaurant Travel