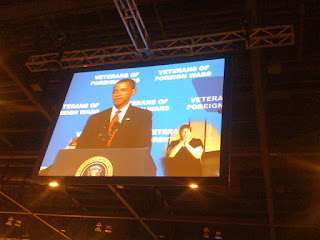 Below are a few choice quotes from President Obama from his appearence this morning (PST) at the Veterans of Foreign Wars 100th Annual Convention. Since he was speaking to the largest and oldest veterans organization in the country, he chose to address military concerns, which was a nice respite from the health care discussion. He made all the right proclamation about protecting and caring for our troops in the field and for our veterans on their return.
I have but one question for the President: How do we pay for all this? I completely agree that the country owes a special obligation to those who spill their own blood for their country. What we must remember is the budget for veterans does not exist in a vacuum. If there is going to be a substantial increase in funding for Veterans Affairs and the military as it fights two wars (as their should be, especially on military pay, housing, etc and health care for wounded warriors), what in the budget will lose funding? To pander to a crowd of veterans by promising them everything they could possibly want, with no explanation of how to pay for it is unfair at best and pandering at worst.
"I will only send you (soldiers) into combat when absolutely necessry and only with the equipment that you need to accomplish your mission"

The policies that have been put in place by the Obama administration wil "put an end to stop loss."

The goal of the defense budget is to "equip forces with tools necessay such as helicopters, protective gear, training and intelligence."

"As Iraqis take control of their destiny they will be tested...the US will keep its obligations."

In Afghanistan: "Diplomacy, development and good government" are what are needed.

"This is not a war of choice but war of necessity. Fundamental to the defense of our people."

"Must prepare our forces for challenges of tomorrow, adapting to the post Cold War world." He stated that twenty years after the end of the Cold War, it was unacceptable that the military was stilled mired in 20th century thinking on combat and war.

Refering to F-22: "Impulse in Washington to protect jobs back home has a cost."

All defense budget items must: "Cut the waste, save taxpayer dollars, support the troops."

The government has a responsibility to military families in many ways, therefore the defense budget includes: "Increasing military pay, better housing, more opportunity for Fed jobs for military spouses, millions of dollars for wounded warriors

"PTSD and traumatic brain injuries are defining I juries of today's war with billions of $dollars for treatment."

Talking of the new GI bill, "You pick the school, we'll pick up the bill" and it school will be "available to all including reservists and children of soldiers"

"No one is going to take away Veterans health care--we're expanding coverage."

One goal of new rules for VA: "Medical care never to be held up by budget delays."
Goal of Obama's VA: "End veteran homelessness--zero tolerence"

"After fighting for America you should not have to fight through red tape to get your benefits."