Posted by Unknown on April 13, 2010
Barcelona is Gaudi's town. If you ever want to capture Barcelona in a single idea, a single image, you would be hard pressed to find a better one than the architecture of Antoni Gaudi. Born in 1852, Gaudi would become the leading proponent of the Catalan Modernismo movement. Though loathed by many of his contemporaries, especially more constrained and less creative architects, in time Gaudi would come to be seen as one of the most creative members of the international Art Nouveau movement.
The following pictures of are Gaudi's four greatest accomplishments in Barcelona--Casa Batllo, Sagrada Familia, Park Guell, and Casa Mila. Each reflects Gaudi's love of nature, bright color, and movement.
Casa Batllo 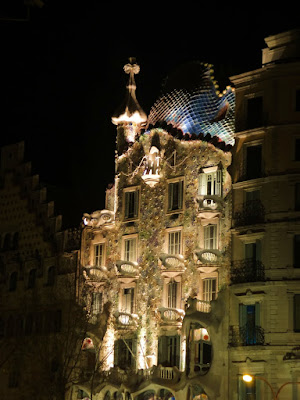 At night, the roof of Casa Batllo looks like the scaly back of a dragon. 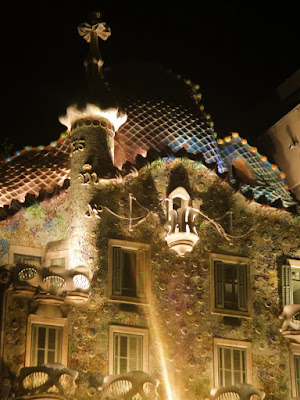 There are no corners in Casa Batllo, just movement like the flow of water. 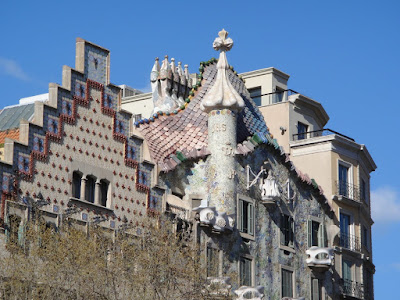 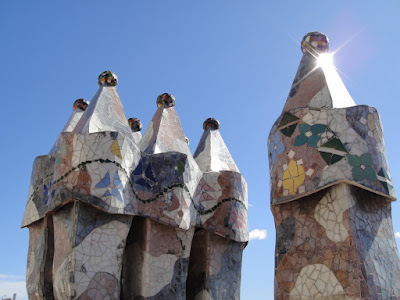 The roof contains Gaudi's playful chimney's decorated with broken tiles scavenged from around the city from places being torn down. 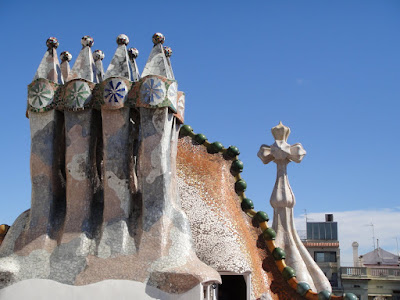 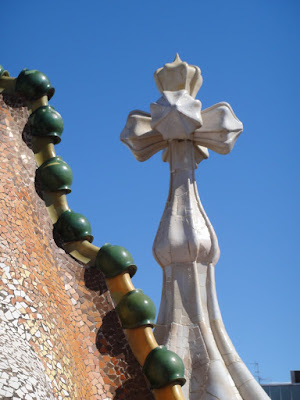 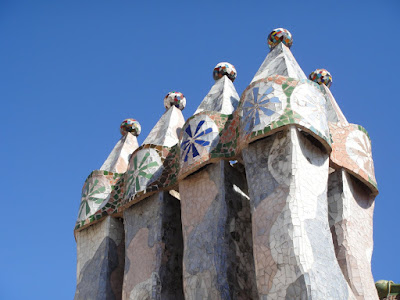 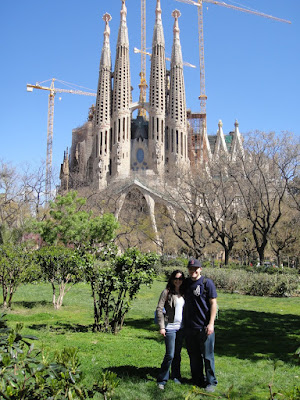 Tori and Brenden in front of Sagrada Familia, Gaudi's final work, which remains unfinished more than a century after it was begun in 1882. 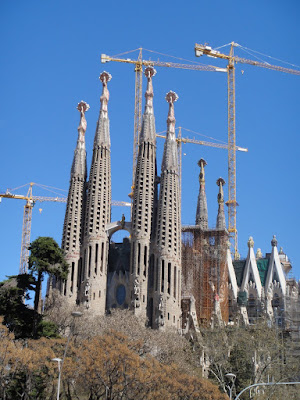 Gaudi speant the last decade of his life--before he was run down and killed by a tram--living in the crypt of this church and dedicating his entire genius to it. After his death, work was continued, but the plans were destroyed by anarchists in 1938 during the Spanish Civil War. 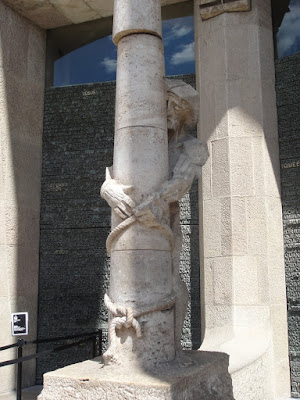 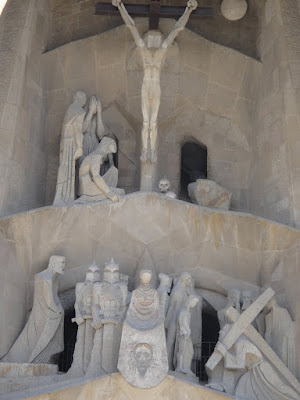 Joseph Maria Subirachs is responsible for the sculptures on the Passion facade of the church. Many have complained that Subirach's work is too dark and angular, but I love it. I think Gaudi would have appreciated the fact that it captures the darkness of Good Friday. 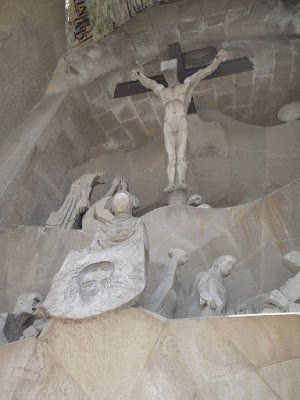 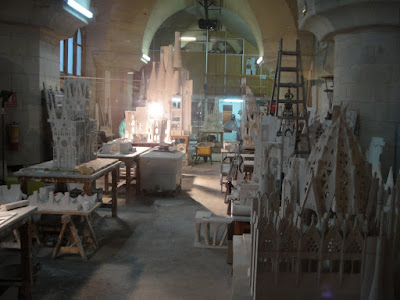 The modelling workshop inside the church. 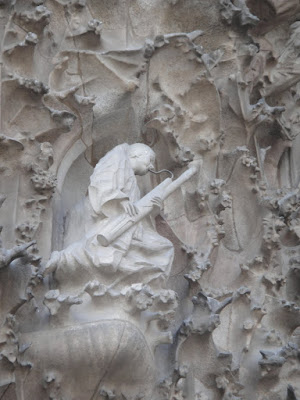 My favorite angel on the Glory facade. Angels are known for playing lutes violins, but a bassoon? 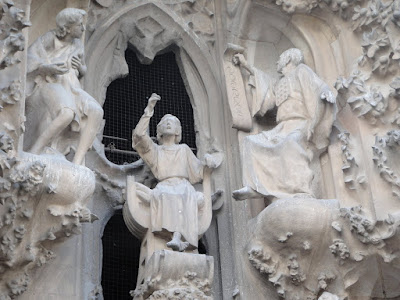 Jesus in the Temple with the Rabbis. 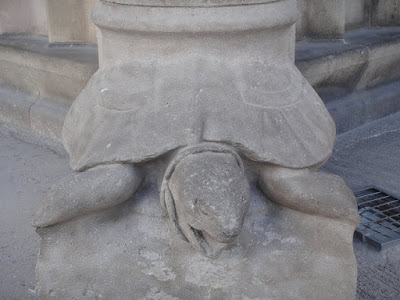 The base of on of the pillars rides on the back of a tortoise, exhibiting Gaudi's love of God's creation. 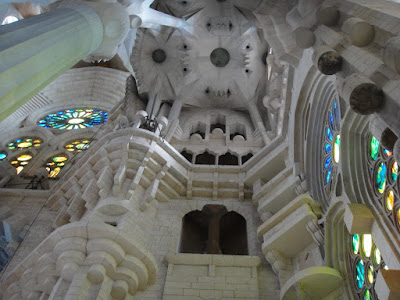 Inside the massive nave of the church. Much of the stained glass has still not been completed. 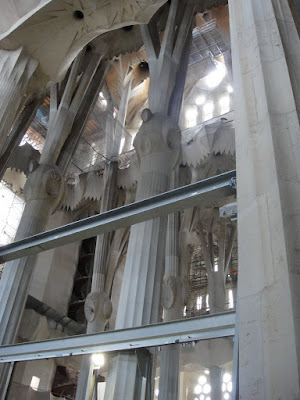 Gaudi designed the pillars to look like trees, so they entire feel is like being in a forest of ancient trees climbing to the heavens.
Park Guell 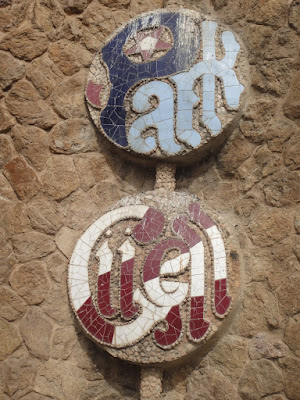 This park was begun at the instigation of industrialist Eusebi Guell, Gaudi's long-time patron. It was intended to be a planned housing estate, but it never garnered enough interest to be financially viable. It was donated to the city eventually. Gaudi did live one of the two houses built by other while Guell lived in the other. 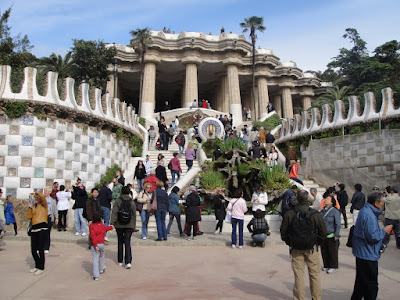 This the stair way to the public space of the development. The pillars support a landing with tiled benches and a beautiful view of the city. A perfect place for a huge block party of this had ever been successful as a neighborhood. 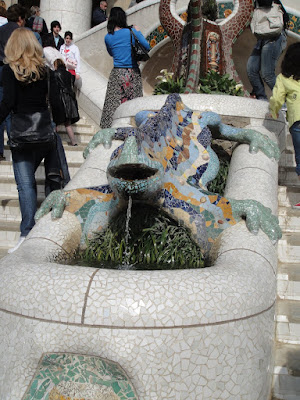 Possibly Gaudi's most famous piece, the Dragon Fountain is now emblematic of the city of Barcelona 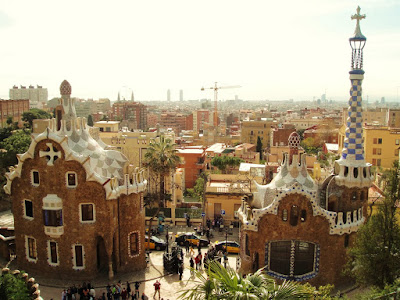 These buildings serve as the entrance to Park Guell. I would happily live in either of them.
Casa Mila, La Pedrera 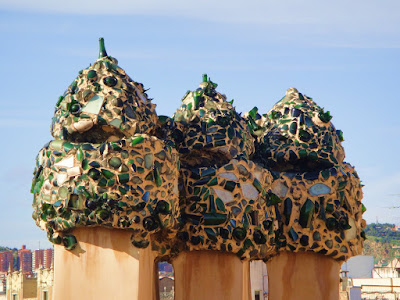 This is the roof of the apartment building Casa Mila; possibly Gaudi's most complete project, he designed it from top to bottom at the height of his designing prowess. 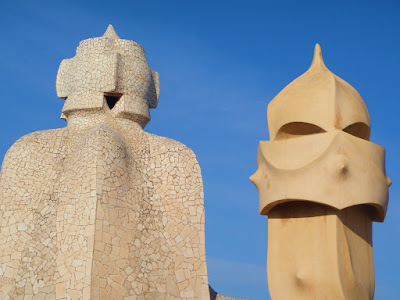 The rumor is that George Lucas was inspired by Gaudi's sculptures and later Darth Vaders helmet was the result. 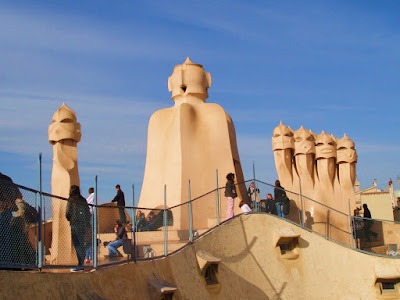 I think this is a perfect space for a party under the stars. 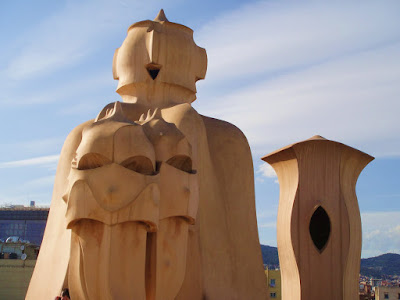 A shot of Sagrada Familia from the roof of La Pedrera.
Barcelona Travel