Posted by Unknown on April 12, 2010
So what is food without wine, and let me tell you, Spain has plenty of the good stuff. In fact, they have some of the best old world wine and less than old world prices. So it was off to Penedes, one of Spain less well know wine regions at the heart of Catalunya. Thanks to Tori's stop at the tourism center, we opted for the bus that would visit three different wineries by bus with an English speaking guide. 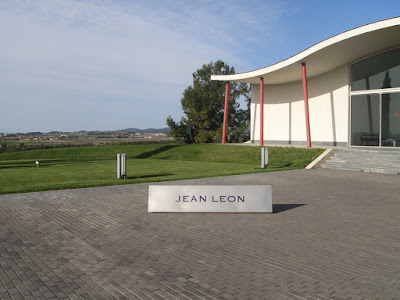 First stop was the winery of Jean Leon. This boutique winery was the brain child of Cefferino Carrion, a Spaniard whose refusal to serve in Franco's army drove him from his homeland to Hollywood via Paris and New York. In LA he changed his name to Jean Leon, worked for Frank Sinatra and developed a friendship with James Dean which would lead to their shared dream, the restaurant La Scala. In 1968 he decided to found his own vineyard to create the wines that would best complement the food at La Scala. 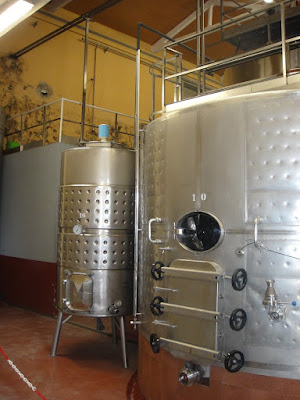 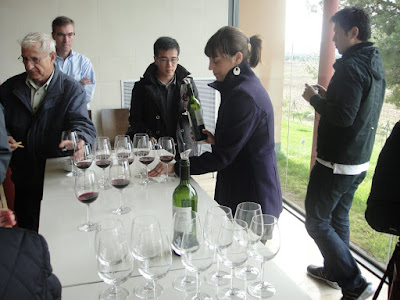 Jean Leon wines are truly hand crafted, with picking and pruning done manually. The tasting was fun, but I was not overwhelmed. Not being much of a Cabernet fan put me at a disadvantage. In truth, I really prefer local varietals. Give me a good garnacha or a tempranillo anytime. To each his own I guess. Jean Leon was served a Ronald Reagan welcome to the White House in 1981, which is something. 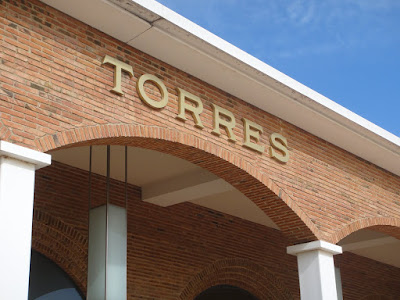 Torres winery was our next stop. Funny enough, before he died, Jean Leon sold his vineyard to Torres, one of the largest wineries in the region. The Torres family have been making wines for generations, and are in their third century as a wine company.

This is the magnificent expanse of Torres vineyards. Bombed during the Spanish Civil War, a massive effort resurrected the winery, and today they have family properties in Chile and California. 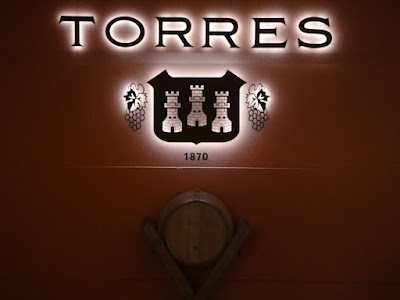 The tour of Torres was really, as Brenden described it, the Disney of winery tours. We were bundled into a tram that was driven around the plant with a canned description of the procedures around us. There were even some hologram projections and weird high tech pictures and sounds. Of course, being Semana Santa (Holy Week), there was little work going on as most people had the day off. 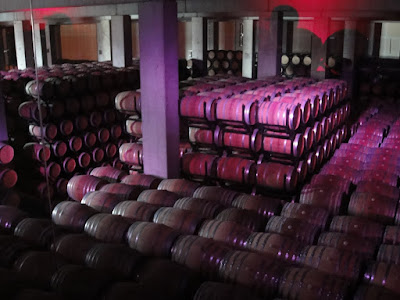 Torres is a serious winery, with plenty of wine in casks, which do double duty as brandy casks at another Torres winery once they are done here. Torres offers six red, three white, and one rosado at it Catalunya winery; they have twenty-four different offerings in Spain alone. 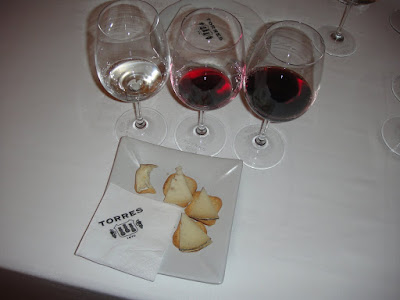 The tasting was a wine and cheese pairing with three wines and three cheeses. First was the Viña Esmerelda, a Gewürtztraminer and Moscatel blend that was light and refreshing. Paired with a Spanish version of Camembert cheese, it was my favorite of the day. The second and third wines were reds, but neither knocked my socks off, and I can't remember which was which, so.... Next time I will bring my note pad and take actual notes so I remember what I sampled. 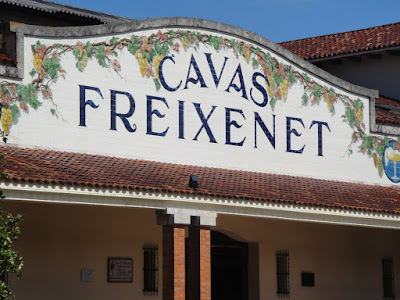 Cavas Freixenet was the last stop on this marry sojourn, and it was possibly the best tour of them all. Cava is the Spanish sparkling wine, which cannot be called champagne because it is not from the Champagne region of France, thus cava. Having toured the winery at Moet & Chandon--the makers of Dom Perignon--I can tell you there is no difference in the methods that produce cava. The only real difference between French champagne and Spanish cava is the source grapes. 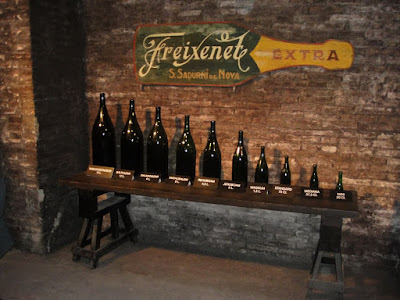 Like champagne, bottles of bubbles can be quite massive. Names after Biblical kings and persons, the giant bottle, in order are the Nebuchadnezzar holds 15 liters, the Balthazar has 12 liters, the Salmanazar holds 9 liters, the Mathusalem is 6 liters, the Rehoboam is 4 liters, the Jeroboam is three liters, and of course a magnum is a 1.5 liters, while the standard is 750 ml, the mediana is half that at 375 ml, and the individual mini is just 200 ml. 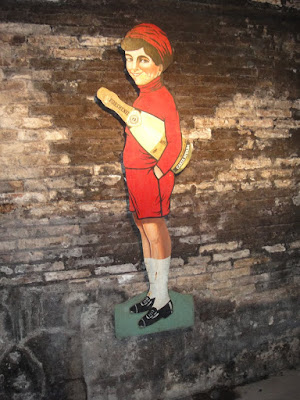 This is Freixenet's most famous advertisement, which is never scene outside of Spain as a little boy carrying a bottle of booze as big as he is is most gauche. 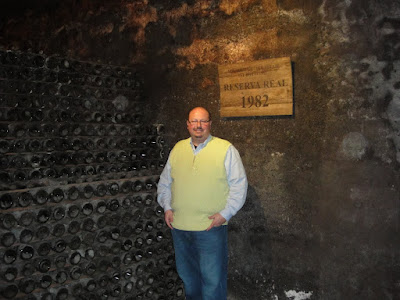 Standing in front of the Reserva Real 1982. This is the wine I brought home; the best they have to offer of course. Soon after the death of Franco and the ascension to the throne of King Juan Carlos, the monarch and his wife toured Freixenet and the result was a Royal vineyard and a cava to match. This is not available in the USA, which is part of the reason I wanted to bring it home. Now I just need a good excuse to celebrate. 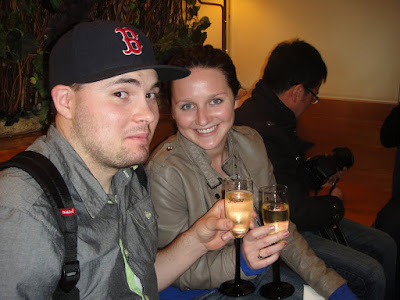 At the end of the tour, we not only sampled both the Cordon Negro Brut and the rosado as well, but they fed us tapas too. Cheese, Serrano ham, chips, and tomato rub bread was just the right way to end our day. Brenden, it turns out, loves the cava. I think I saw him stealing other people half empty glasses.
Barcelona food Travel

Unknown said…
Nice posting, I read your blog and found beautiful information about food and wine tour related. if any body want to know more information about Italy wine and cooking tour then please visit. Italy Wine Tours and Italian wine tours
5:02 AM