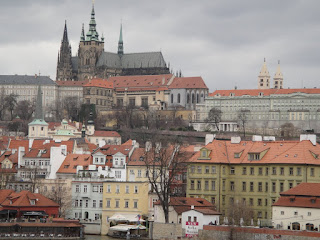 US Airways is, in many ways, the very bane of my existence, but sometimes serendipity comes along. So, to make a long story short, I had a $400 voucher for US Air after being bumped from a flight to Miami on Columbus Day weekend last fall. When I booked my travel to Barcelona, Spain way back in January, the daily flight from Philadelphia to Barcelona was not in the computer system. I opted then to book Philadelphia-Frankfurt-Barcelona flight. This, I was told, was impossible because Lufthansa, who would fly the leg from Frankfurt to Barcelona did not accept US Air vouchers. It did not matter that my measly little voucher would hardly pay for the return Barcelona-Philadelphia flight and I would pay cash for the rest. It was not possible, so I booked Philadelphia-Frankfurt and Barcelona-Philadelphia with US Air and went shopping for a flight from Frankfurt to Barcelona. I found one on Czech Air flying Frankfurt to 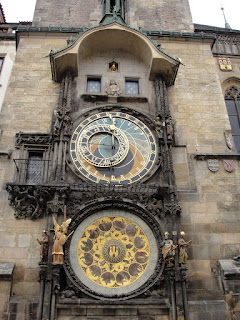 Prague at 9:30 AM and Prague to Barcelona at 9:30 PM. I was going to get a free day in a city I have always wanted to visit. Take that US Air!
There were several things I needed to cram into this one day in Prague. First was the Astronomical Clock at the Old Town Square. Built in 1410, the Orloj is composed of a mechanical clock, an astrolabe tracing the movement of the sun and the moon, a calendar dial, and the Walk of the Apostles. Located 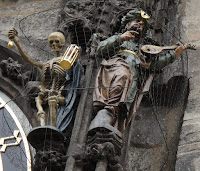 on the southern wall of the old city hall, the Orloj marks every hour with a procession of the apostles, wooden statues that pass through two windows while a bell rings to the hour out throughout the Old Town Square.
The best bit is the fact that the ring-ing of the bell is done by the hourglass wielding, cape wearing skeleton Death. 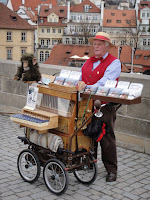 Next on the list of must see historic sites was the Charles Bridge. A magnificently gothic structure begun in 1357 by Holy Roman Emperor Charles IV, the bridge crosses the Vltava River connecting eastern and western Europe, making Prague an important crossroads for trade in the middle ages. The Charles Bridge is lines with a series of statues and statuary, mostly religious in nature, were erected between 1683 and 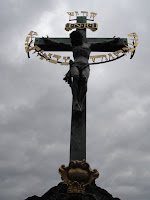 1714. At each end of the bridge is a gothic tower, while along the bridge are hawkers, artists, and performers, including an organ grinder with his stuffed monkey and a Dixieland jazz band.
After crossing over the Charles bridge, I headed to the Mala Strana or Little Quarter in search of Our Lady Victorious Church. Why this particular church? Namesly for a single holy statue, the Infant Jesus of Prague. Originally brought to Bohemia in 1628 from Spain, the this small statute representing Jesus as a child developed a following 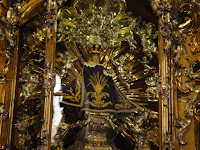 first among the Carmelites. The tiny Jesus is dressed according to the liturgical season of the Church, gold, green, red, blue, purple, rose, etcetera, etcetera. Growing up, this was a common devotion among Catholics, with little plastic statues in people's homes and churches. To sit in Our Lady Victorious Church and pray was a moving experience that connected me to people of faith whose devotion to the Infant Jesus of Prague over the last four centuries.
Next I proceeded to Prague Castle and Saint Vitus Cathedral, climbing the hill to the medieval 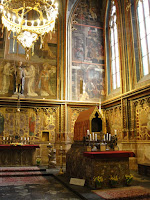 center of Prague. Founded in 925 by good King Wenceslas (yes the one from the Christmas carol), St. Vitus is one of the great gothic cathedral's that influenced gothic architecture throughout central Europe. Begun in 1344 by soon-to-be Holy Roman Emperor Charles IV, the cathedral was intended as a pilgrimage spot as well as a family crypt and final resting place for Charles himself. Inside the cathedral is the Saint Wenceslas 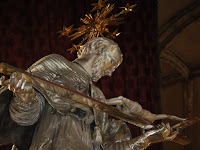 Chapel, marking the spot where the original chapel stood and serving as the final resting place of the patron of Bohemia. The Tomb of Saint John of Nepomuk is a gorgeous silver sculpture of Bohemia's martyred saint.
Prague, the city of Tyco Brahe and Johan Kepler and Mozart and Franz Kafka, is filled with too many things to see in a single day. I would happily return for the Museum of Communism and the chance to read Vaclav Havel's plays while basking in the radiance of Frank Ghery's Dancing House. I guess the moral of the story is sometimes a bad situation has the potential to turn into something great if you let it. Below are a couple more photos that hint at the uniqueness of Prague. 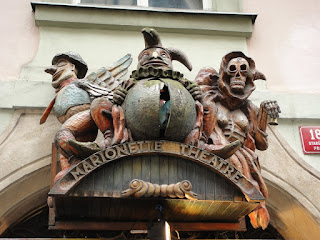 Prague is known for its marionette theatres, especially those that perform Mozart operas. 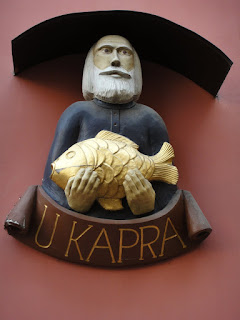 One of the allegorical symbols that served as address markers for streets were numbered. 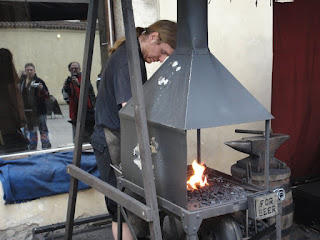 An iron worker plying an ancient craft in the Prague Castle.
Travel