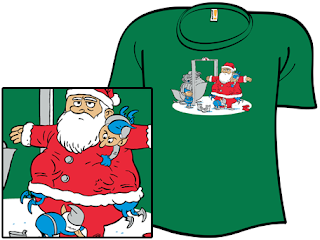 So for those who are still interested in the TSA naked body scanner story, here's a great piece from FoxBusiness. (My thanks to Jim for sending me the link.) Essentially it names names of those in Congress who are invested in the scanner tech company L3. Leading the pack is Senator John Kerry, the senior senator from Massachusetts. His wife owns between $500,000 and $1,000,000 in stock. Seven other members of Congress, both Republicans and Democrats are invested.
More interesting to me is the is the little known fact that Michael Chertoff, former head of the Department of Homeland Security (just writing that name now puts me on a list somewhere in the bowels of this bureaucracy) under George W. Bush is the number one lobbyist for RapiScan, another naked scanner company. I do wonder how many members of Congress were swindled by this guy telling them naked scanners will protect the nation? How many asked him what he was getting out of the deal?
I would hope that when a former Secretary of Homeland Security or Director of the CIA testifies before Congress, he would present the truth and not a pimp a product to enrich himself. Such is my political naivete. Ah well, back to reality. We are now no more safe (see Cato's analysis), a little poorer as a nation, and much more harried as a traveling public for the sake of $150,000 machines that make members of Congress and former DHS secretaries wealthy beyond imagining.