The King's Speech and Black Swan 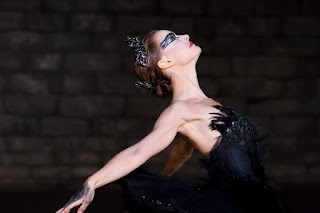 Since Christmas I have been trying to get to the movies, and finally, in the last week, I have seen two of the movies on my list, "The King's Speech" and "Black Swan." Both are worthy of the Oscar buzz, and both are worth seeing, but I must admit that the story of King George VI's speech impediment wins the prize for most enjoyable of the films.
First, the actors in both films are brilliant. Colin Firth is so believable with that stammer, he seems to drown in silence as he tries to form the words that prove entirely elusive. Geoffrey Rush as Lionel Logue--the unconventional therapist who audaciously addresses the soon to be king as Bertie, using the familiar family name that no commoner should dare speak--is a joy to watch. Helena Bonham Carter as Queen Elizabeth is just too perfect, and it is a nice change from the strung out, mentally deranged witch from Harry Potter.
In the "Black Swan" Natalie Portman gives the performance of her career. This is no Queen Amadala. She embo
dies the fragile and frigid dancer Nina Sayers who cannot dare to lose herself in the dance. She is nearly broken, until she allows herself to be momentarily transformed into the Black Queen. It is in those momentary flashes of confidence and brilliance that Portman displays the range and depth of her talent. Vincent Cassel as the caddish director Thomas Leroy and Mila Kunis as the potential rival Lily bring realism European gravitas to the ballet. 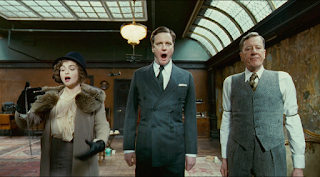 Of the two, "The King's Speech" is the most watchable and uplifting, and thus much more my cup of tea. "Black Swan" is an intense exploration of the dark majesty of the human psyche. Though both main characters overcome their deficits, but whereas King George is a greater person for overcoming his stammer, Nine is destroyed when she loses herself in the perfect dance.
I love a movie that makes me feel better about the often dark and ugly world which we inhabit. I am not looking for treacle, but stories of heroic strength in the face of struggle make the me feel better about all the ugliness I'm forced to read about in the news daily. Explorations of the darkest parts of obsession, though worthy of recognition of great praise, never make it onto my desert island DVDs. "Black Swan" is brilliant, but I don't need to see it again.
"The King's Speech" on the other hand I could watch again and again. It is filled with an array of emotions, but it is especially good at the humorous and the poignant. A favorite scene: Queen Elizabeth is sitting at Lionel's kitchen table having tea while the therapist works with his kingly patient when Mrs. Logue returns home to find the new Queen of England sitting there. As the poor woman begins to stammer as she tries to greet her monarch, Elizabeth breaks the tension saying, "It is your highness the first time, then Ma'am. That's ma'am not mum." Those of us who grew up with Elizabeth the beloved G&T loving Queen Mum could not help but laugh heartily.
Go see both films. They are worn your time and money.
- Posted using BlogPress from my iPad