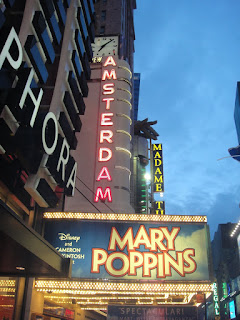 I do not understand why people rave about Disney on Broadway. Case in point, Mary Poppins has received ridiculously good reviews, but having seen it last night, color me unimpressed. Let me start by saying that the Disney movie Mary Poppins is a childhood favorite, which means I am predisposed to dislike any kind of remake. In truth, though, the Broadway remake suffers from weak, amateurish direction like the very worst of community theater.
First, let me acknowledge that the cast was supremely talented. It is impossible to hear such classic songs as "Spoonful of Sugar," "Supercalifragilisticexpialidocious," and "Chim Chim Cheree" without hear Julie Andrews and Dick Van Dyke. Unfortunately, as talented as the cast was, they were only a shadow of Andrews and Van Dyke. So why remake it, other than to make money off of the tourist who visit NYC but don't know theatre.
In addition to the talented cast, the set was brilliant, nothing less than what you would expect from Disney. I also liked the addition of Mr. Banks' nanny Miss Andrew and her wicked number "Brimstone and Treacle." Because she is only on stage for a few minutes, Nanny Andrew can be a two-dimensional character. The problem is every character is two-dimensional. They are all over-the-top in their performances, like the director decided since he could not have the cartoon segments from the movie, he would turn the entire performance into a cartoon.
Mrs. Corry, Neleus, the Bank Chairman, Admiral Boom, even the Banks family themselves are really flat characters with no depth. Bert and Mary are hardly any more developed. On the flat screen of movies and television, this works, but on stage it's a disaster. Changing the order of the songs and adding new music does nothing for developing the characters, and this is what is missing. To make this work on Broadway, Mary Poppins needs to be more than the movie.
If ever there was a director with the experience to develop these characters, it should have been Richard Eyre of the Royal National Theatre. This is the guy who directed The Crucible on Broadway and the film Notes on a Scandal with Dame Judy Dench. Instead of exploring the emotional depth with humor and fun, Eyre give treacle with no brimstone.
On a final note, what should have been the show stopping climax, "Step in Time," proved only that tap is dead. Though the uninitiated crowd thought it was the greatest dance performance ever, I know better. I honestly think my high school musical theater troupe would have been far superior. At least I can still claim to never have paid to see Disney on Broadway.
Broadway