The Book of Mormon, The Musical 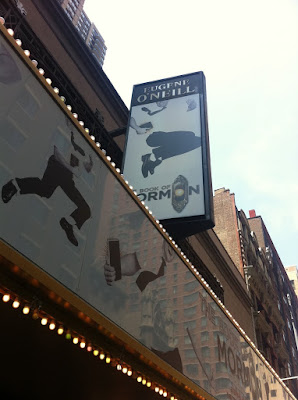 The Book of Mormon, the Broadway musical by South Park creators Trey Parker and Matt Stone, is the most offensive thing I have ever witnessed. If Avenue Q was irreverent, The Book of Mormon is down right blasphemous, a scandal the likes of which Broadway has never known. It is also the funniest thing on Broadway in decades; the best thing I have ever happily paid $400 to see. If you are easily offended, move on, but for those with a taste for the perfect balance of potty humor, biting satire, and old time song and dance, The Book of Mormon is for you.
Fans of South Park know that Matt and Trey have an incredulous fascination with religion, and the peculiar beliefs that underpin all religions. Whether it is the perceived cannibalism of Catholicism ("This is my body, this is my blood...") or the auditing and thetan levels of Scientology, South Park has lambasted just about every known religion. There is a special place in the hearts of Matt and Trey, though, for Mormonism, the story of Joseph Smith and the Golden Plates. Mormons themselves whose credulity and politeness combined with the practice of a two year mission to preach the Word make them a perfect target for the guys' unique brand of satirical humor.
The musical version of The Book of Mormon tells the story of two young missionaries, Elder Kevin Price (Andrew Rannells) the super star trainee whose only desire in the world is to do something incredible. His mission brother is Elder Arnold Cunningham (Josh Gad), a spaz and pathological liar desperate for a best friend. Ehen everyone else heads off to vacation destinations like Norway, France, and Japan, Price and Cunningham are assigned to Uganda, Matt and Trey's shorthand for the worst place on earth where women are circumcised, war lords kill indiscriminately, the poverty is soul crushing, and hope is displaced by fear (and maggots).
In Uganda Elder Price faces a crisis of faith and Elder Cunningham preaches a unique version of Mormonism in order to convert the Africans. Among the Ugandans, Kevin and Arnold meet Nabulungi (Nikki M. James) who risks stealing the show with her sweet performance. She dreams of escaping the misery of Africa for gold thatched rooves of Salt Lake City.
"The Book of Mormon" may be Matt and Trey's greatest achievement. Filled with running jokes about texting, Nabulungi's name, and maggots, the show has all the humorous trade marks the South Park duo are known for, including a big flashy scene from hell with dancing demons and assorted mass murderers. It is also filled with a deep look at faith and the meaning of being a person of faith in the modern world. Ultimately, though they might poke fun, I think the guys deeply respect people who believe and at a minimum believe people should have the freedom to believe as they want.
Robert Lopez, Tony Award winning creator of Avenue Q, is easily lost in the sycophantic praise of Stone and Parker, but he is certainly the reason why this show hits all the right Broadway notes. Partnering with Lopez was an inspired choice as he brings experience and buckets of talent to the team. What is most amazing is how seamlessly the three collaborated to create "The Book of Mormon."
Kudos, by the way, to the Church of Latter Day Saints for its incredibly measured response to what many may find to be hurtful. In response to the opening of the Broadway show, the Church issued the following statement: "The production may attempt to entertain audiences for an evening, but the Book of Mormon as a volume of scripture will change people's lives forever by bringing them closer to Christ." This is the perfect answer...no protests or boycotts, no fatwas or excommunications.
No one but Matt Stone and Trey Parker could pull off "The Book of Mormon." I don't see it being revived in ten years, but if we are lucky, it will still being running even then. To learn more about this genius show, check out Matt and Trey's interview with Terry Gross of NPR's Fresh Air.
Broadway