Elizabeth the Queen: Life of a Modern Monarch 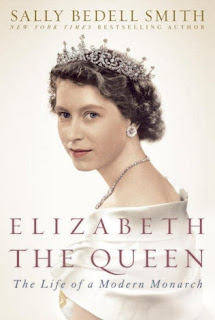 In a new biography celebrating Elizabeth II's diamond jubilee, American journalist Sally Bedell Smith creates an intimate portrait of the queen's six decades on the English throne. Elizabeth the Queen begins with the young ten year old princess receiving the news that her uncles had abdicated and her father was the new King of England.

Filled with quotes from courtiers, government officials, family and friends, the biography, captures the essence of the queen. Though I have always respected the queen for her strength and her "Keep Calm and Carry On" attitude, I found myself even more in awe of a woman whose commitment not only to the UK but the Commonwealth has made the world a better place. There is also insight into Prince Phillip's gaffe's and Prince Charles' continuing tenure as Prince of Wales and heir to the thrown.

Elizabeth II's words to the American people during her bicentennial visit may best sum up her understanding of the world and her place in it. "'I speak to you as the direct descendant of King George III,' she said, noting that the Fourth of July 'should be celebrated as much in Britain as in America ... in sincere gratitude to the Founding Fathers ... for having taught Britain a very valuable lesson. We lost the American colonies because we lacked the statesmanship to know the right time, and the manner of yielding what is impossible to keep. ... We learned to respect the rights of others to govern themselves in their own ways.... Without that great act in the cause of liberty, performed in Independence Hall 200 years ago, we could never have transformed an empire into a commonwealth.'"

With eighty-three pages of source notes and ten pages of bibliography, this is a phenomenally well researched modern biography of one the enduring figures of the twentieth and now the twenty-first century.

Anonymous said…
This comment has been removed by a blog administrator.
2:47 AM

Premium SEO - Olympia said…
Wonderful book for those who love the history of the Queen. Have passed it on to many of my friends.
12:55 AM